Google UAC as a Source of Traffic for Mobile Applications

In this report, we are exploring how Google UAC is an important tool for mobile app marketers. 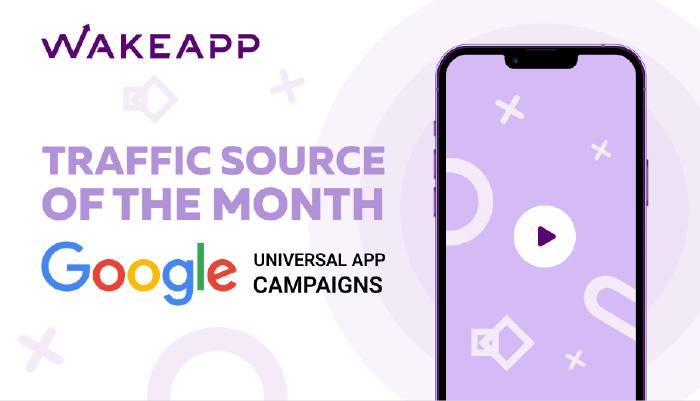 Earlier, in order for an application to become popular among users, it was simply necessary to create a unique program that has no analogs and connects the client and service; today this is no longer enough. The number of applications in the app stores has reached unprecedented heights: 2.6 million in Google Play and almost 4.5 million in the Apple App Store (Statista).

The WakeApp team decided to help novice marketers, partners, and specialists in the mobile app promotion market to keep abreast of the latest trends in GEOS and traffic sources and promotion features in them. This time we would like to introduce our readers to an equally well-known traffic source and a tool that specializes in the promotion of mobile applications - Google UAC. The peculiarity of launching an advertising campaign through Google UAC is the absence of its targeted settings. How can a marketer use Google UAC?

Google UAC is suitable for promoting off-the-shelf apps of partner networks and direct advertisers. As a product of Google Corporation, UAC is directly related to the policy of the advertising network. Apps available for promotion must pass moderation without fail and be added to the Play Store and App Store.

Thus, applications of such market representatives as gambling, betting, dating, and other gray and illegal applications are not available for promotion in UAC.

The moderation algorithm checks all applications before uploading them to the market, so you need to make sure that the promoted content complies with the rules. It takes time to set up a machine algorithm for optimizing advertising campaigns. Google UAC lacks the ability to set up flexible targeting. Therefore, it takes some time for the program to identify the target audience for a specific application by testing creatives and headlines, which slows down the entire promotion process. With the ever-increasing competition in the mobile app market and the inability to accurately define the target audience and fine-tune targeting when working with Google UAC, the primary task of the marketer is to find new ways to influence online market algorithms. Features of setting up an advertising campaign in Google UAC

Unlike Google contextual advertising, ads in Google UAC are automatically generated after creatives and titles are loaded by the media buyer. The system independently selects the best design options and the format of the advertising offer, based on a preliminary analysis of user behavior. Thus, users see only those ads that the system has rated as the most profitable and effective with the highest conversion probability.

Individual automatic launch of advertising campaigns allows you to avoid premature blocking by the system. Each subsequent ad group is different from the previous one, provided that the basic targeting settings are maintained.

Those who have not worked with Google UAC before will have to get used to the instability of traffic in this source. Experienced media buyers advise dividing large advertising campaigns into many small ones with dozens or hundreds of ads and a minimal advertising budget. This allows the UAC algorithm to hold qualities

The effectiveness of working with UAC largely depends on the quality of Google advertising account farming and the application itself. Accounts with high trust on the part of the system achieve a larger spend in a short time. The application trust level is generated automatically at the time of moderation and publication in the Store.

It is worth increasing the budget for the campaign gradually. A sharp increase to $10,000 can lead to account blocking due to suspicious activity. According to statistics, video creatives convert better than others, which is why the Google platform itself recommends this format for promotion. Google UAC programmatic training allows you to increase the relevancy of your ads. The system will independently select titles, images, videos, and HTML5 from the list of downloaded ones.

If you do not specify any, the algorithm will collect them from the data found in the Play Store. The Google UAC ad generation algorithm works similarly to Google's responsive search ads. The only difference is the sites where the ads are published. Google Ads UAC ads are displayed not only in search results but also in Google Play, YouTube, and Google Display Network.

In order for the promoted application to be noticed, it needs to be fixed in the search results and tops of thematic collections. Despite the paucity of Google UAC settings, it is more than realistic to succeed in promoting applications with its help.

How does Google UAC work in WakeApp?

Google UAC is one of the 30+ sources our media buyers use to promote their WakeApp apps.

For more than 8 years at WakeApp, we have been using this traffic source for the convenience of our clients, whose goal is to attract a young and, at the same time, solvent audience.

Google UAC is an effective tool for promoting brands with a small budget. The cost of a click in Google UAC is the average for the market.

Every month, WakeApp will issue instructions for promotions in a particular source and GEO traffic, talking about the features of promotion, and sharing limitations and life hacks. Think of it as a mobile marketer's desktop guide.

WakeApp is an international mobile marketing agency, with over 8 years of experience in the market. It is a leader in the development and promotion of gaming and non-gaming mobile applications in e-com, video streaming, food delivery, sport, utilities, and finance verticals. Earlier in 2022, WakeApp received The Media Agency of the Year at Sigma Asia Awards, in 2021 the agency placed in 5 categories of the 13th edition of the AppsFlyer Performance Index XIII.

PREVIOUS Should First-Time Crypto Investors Buy the Most Popular Stablecoins?

NEXT How the Metaverse will Affect the Business Landscape

New York, NY (September 23, 2019) -- Reading Eggs, an online reading program that helps children learn to read, has come up with a new survey conducted online by YouGov. The survey suggests that the majority of Americans agree with prioritizing reading as an activity during the early stages directly