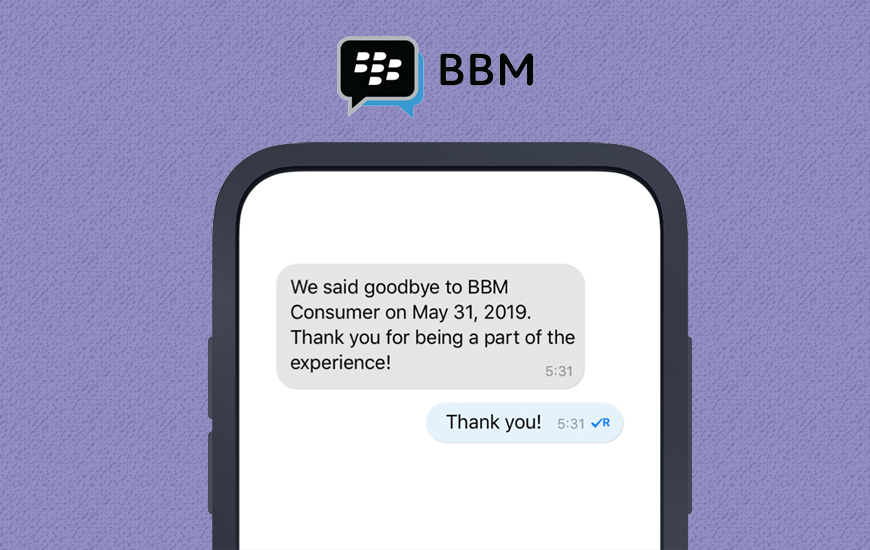 Only around a month ago did Emtek announce that BlackBerry Messenger application would soon be discontinued. But who would’ve thought it would be this soon that this once ubiquitous messaging app would be plugged out on the 31st of May, 2019?

BBM was launched in 2005 and only three years later, Indonesia-based tech conglomerate, Emtek 11, acquired BlackBerry Messenger. Till the time it was not available on other platforms, all BlackBerry devices were sold majorly because of BlackBerry messaging services.

In 2013, BlackBerry messaging services were made available on various other platforms, such as iOS and Android. But, sadly, due to the ever-growing, soul-crushing competition between other messaging platforms, BBM lost its popularity.

“We poured our hearts into making this a reality, and we are proud of what we have built to date,”

“The technology industry however, is very fluid, and in spite of our substantial efforts, users have moved on to other platforms, while new users proved difficult to sign on.”

Before BBM services vanish forever, users can still download their files, photos, and videos. The BBM enterprise will still be available for business users for a nominal amount of $2.49 after the first year.

The death of the consumer version of BBM can be seen as the end of an era of classic messaging services.

For more information on the latest Mobile apps news, stay tuned with MobileAppDaily.

PREVIOUS Everything About iOS 12 Features and iOS 12.4 Release Date

NEXT Apple Plotting To Kill iTunes At WWDC 2019

Google Maps Gets An Update To Support iPhone X

It's almost a month since the Apple fans got their hands on the iPhone X now, Google has updated its most anticipated app, the Google maps for the iPhone. The company has been working since last 27 days to update the Google Maps for iPhone X support.The newly updated Google Maps is designed