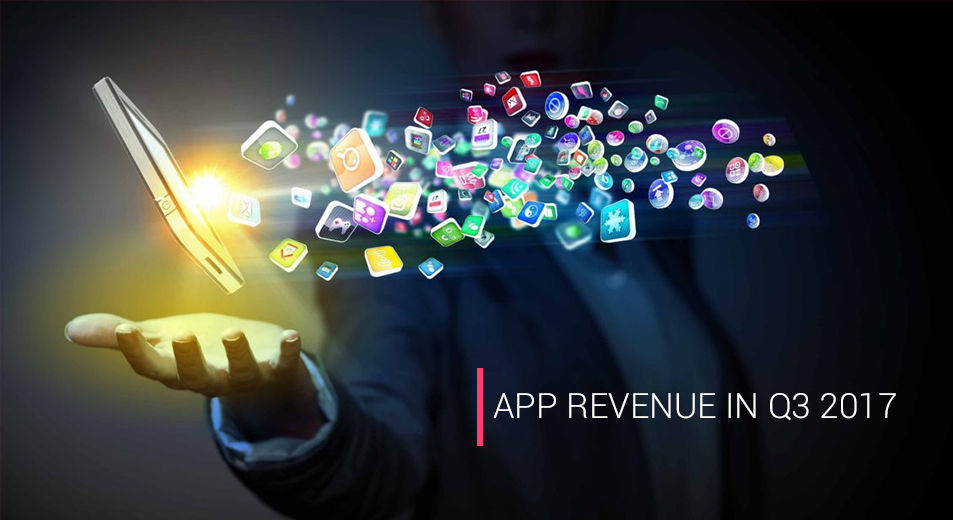 The biggest Mobile app technology news everyone has been waiting for is here predicting a shift in the App development trends of the upcoming year. According to a new research report from App Annie, App revenue and number of downloads hit record levels in the third quarter of 2017. With an 8% upscale in the statistics as compared to last year’s Q3- Downloads across the two major app stores, Apple’s App Store and Google Play, reached nearly 26 billion worldwide. What makes these all the more remarkable is that the figures do not include reinstalls or app updates, only new downloads- a sign to true growth. The app revenue also accompanied the downloads as it reached a record of nearly $17 billion. 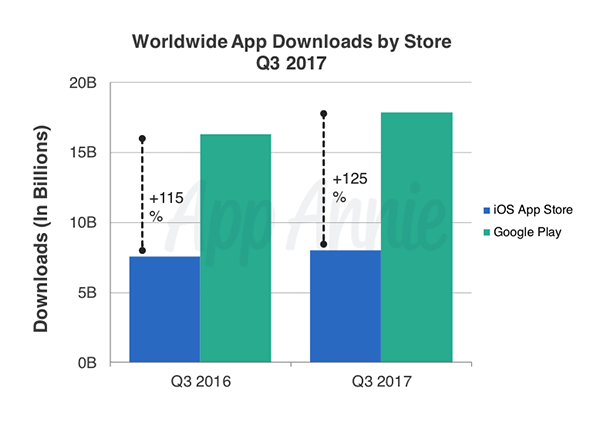 Emerging markets took the front seat in Q3 as App Annie found that the download growth on Google Play was heavily fueled by countries like India- the biggest contributor to the downloads. “The ongoing influx of first-time smartphone owners in these countries has been a significant driver of this growth, states App Annie.” Other Southeast Asian nations such Indonesia in 4th place and Vietnam rising up to 7th have contributed to Google Play growth, too. 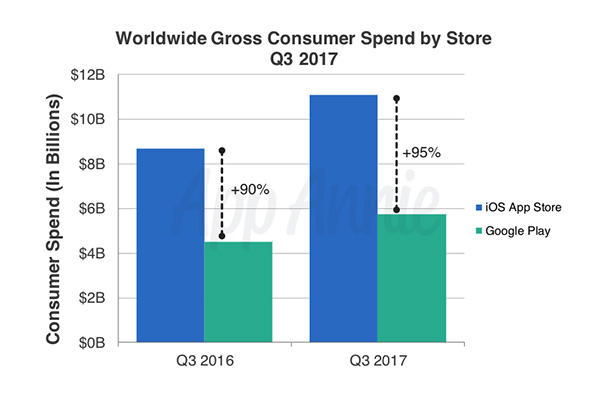 As for the close competition between Google Play and iOS, just like the previous quarters, Google Play maintained a healthy lead over iOS for worldwide downloads in Q3 2017. In fact, the gap widened to 125% compared to 115% in Q3 2016. With nearly a 10% year over year download growth, Google Play is outpacing download growth of iOS. Yet, iOS experienced its highest quarter over quarter growth rate since Q1 2016 as worldwide downloads surged in Q3 2017 grew 8% over Q2 2017. The credit of which is largely attributable to China, which saw the highest quarter over quarter market share growth, followed by the U.S. and Saudi Arabia. 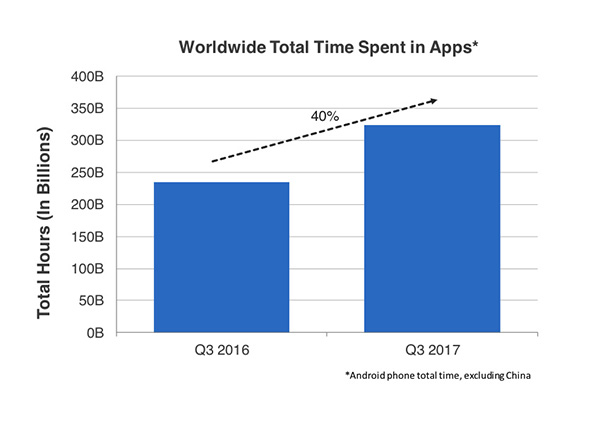 The latest report also highlights the shift in consumer attitude towards App economy as the consumer spend hits nearly $17 billion (combing iOS and Google Play), marking a revenue growth rate of 28 percent over the year prior. Google may be winning in terms of downloads, but Apple is making more money- in Q3 2017, consumer spending on iOS was almost double that of Google Play. Though China again is leading the sector of absolute consumer spend, South Korea for is now at its highest ranking ever as 4th overall in consumer spending. A key reason attributed to this growth is NCSOFT’s game, Lineage M, which became the highest grossing app on both platforms in the quarter. Entertainment apps, and particularly video streaming apps, also had a strong showing in Q3, with a worldwide consumer, spend in the category up by 30 percent quarter over quarter on iOS, and up 45 percent on Google Play. On iOS- Tencent Video grew the most, followed by Youku and Starz, whereas on Google Play, HBO NOW had the highest share change, followed by Netflix and Starz. App Annie’s current forecast estimates that worldwide downloads will reach nearly 240 billion and consumer spending will top $100 billion by 2021.

The rumour of GitHub acquisition by Microsoft has finally stood true to its colour. In a recent statement, Microsoft has confirmed the buy-out of GitHub at a staggering cost of $7.5 Billion. Now, GitHub will be headed by Nat Friedman, former Xamarin CEO and Chris Wanstrath, the former CEO of GitHub