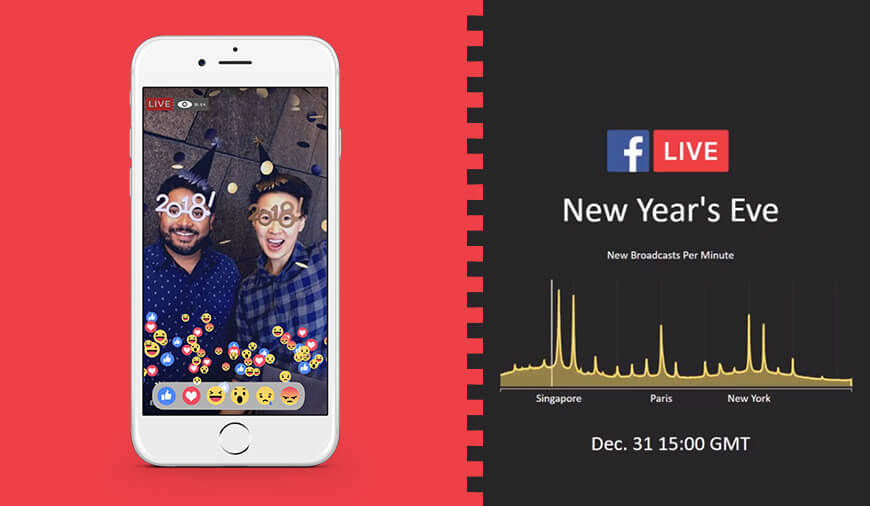 While on the occasion of New year’ eve WhatsApp disappointed the users with the overloaded server, Facebook was hosting more than 10 million live streaming. According To the data shared by Facebook shows that on new year’s night maximum number of user went live on the platform to celebrate. Facebook mentioned that it has experienced 47 percent hike in a number of the user going live on new year’s night.

In order to make the new year's celebration more special for the Facebook Live broadcasting, the platform added exclusive features such as AR stickers of 2018 glasses and hats. New Year's Eve was the biggest event celebration for the Facebook live as millions of users came together to stream live their transition to the new year. Where Facebook users chose the Live streaming to share their night, one of the Facebook Live features got the maximum hit since its launch. The option to go live with a friend on Facebook was used by a number of users during the new year celebration. Among all the viewers most of the people commented ‘wow’ as their reaction to live streaming videos. As Facebook tracked all the new year’s Live streaming it discovered that the top number of users were from Orlando, Florida, Detroit, Memphis, Tennessee, New York, Houston, Chicago, Honolulu, San Antonio, and Milwaukee.

The social media platform hosted the biggest day in the history of its Live streaming feature since its launch and experienced 3 times more live streamers in the new year compared to any other day in December. However, the data given by Facebook did not include the information about the numbers of viewers watched the streaming. But, with the more than 10 million users streaming altogether we can expect a record-breaking amount of viewership. According to a report, Facebook received the maximum viewer count of approximately 80 million on its Live streaming in 2017.

“When you go live you can share your experiences with people you care about. With Facebook Live, people can still be at the same moment even if they aren’t in the same place.” Facebook wrote in the report.

Not only live streaming but the chat messaging apps also set a new record while entering the new year. The VentureBeat reported that the most number of messages have been sent via the chat apps which surpassed the 2016 records of 63 million messages in a day. In Spite of being unavailable for 2 hours, WhatsApp still successfully achieved a milestone of managing 75 million messages sent by the users.