They serviced 100+ clients in 7 years, with millions in revenue. Need further proof of their app development caliber? Read on..!!! 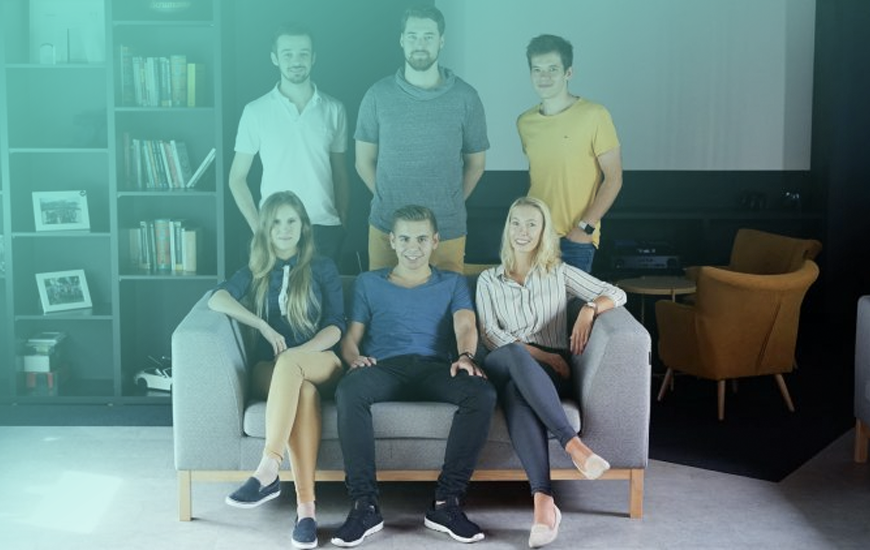 Eleanor Roosevelt once put it, “the future belongs to those who believe in the beauty of their dreams.” This quote has powered innumerable lone-wolfs whose creative and undying spark has turned simple ideas into thriving businesses. One such pair of entrepreneurs is Wojciech Szwajkiewicz and Tomek Muter, not just the subject of this post but also the celebrated founders of Droids and Roids, the mobile software company.

Their brotherhood typifies the founding of a successful tech startup in this day and age, engulfing all the components from bootstrapping, overdue rents, expanding the team and whatnot to partying in Bali (more on that below) and tapping revenues worth millions.

Wojtek grew up in Jelenia Góra, southwestern Poland, completing his schooling from Ireland. He lived off working full-time/part-time jobs one of which included being a forklift driver. Subsequently, he used his earnings from such gigs to buy himself a computer and become a self-taught programmer. Wojtek’s interest saw the first glimpse of opportunity when he began landing projects to design websites.

Tomek, on the other hand, originates from the opposite end of Dębica in southeastern Poland. His father was employed in the Telecommunications sector, owing to which Tomek earned the favor of his teachers and unlimited internet access in school. His first low-risk project was to build a website for his father, following which he partnered (at such a tender age) with a rock band in Dębicato to build another.

Wojtek and Tomek met each other in the Wroclaw University of Technology in 2006. By this time, both had ample hits and tries to identify their programming strengths. Wojtek could create robust website backends while Tomek had evolved into a creative, open-minded front-end developer. Being passionate about computing, both partnered as a team and put their skills to the test outsourcing IT service to major businesses, the best of which included Orange, CreditAgricole, and Totalizator Sportowy. While Wojtek has been the CEO since the word go, Tomek has assumed responsibilities for marketing Droids and Roids. 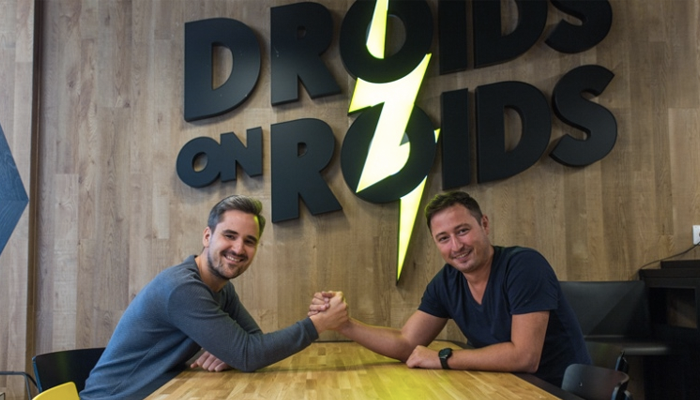 As Wojtek puts it in one of his interviews, “Money doesn't motivate us. For me, it is important that we can be partners for the best and we are constantly developing”. His words resonate a deeper sense of work ethic, one that makes everyone bind and in turn make ideas tick. To an extent, the founder pair were lucky to have started the venture right when the demand for mobile applications was beginning to explode. It so happened they found their perfect ally in  Karol Wrótniak who came onboard to build mobile apps as their third partner.

The Start of Something Beautiful

Big things have small beginnings. Droids and Roids started in 2011 from a rented 2-room apartment. As with most people beginning from scratch, they hit a few rough patches and found themselves overdue on rent. Part of the problem was also that one of their British clients defaulted on a payment of 350,000 PLN (est. $91,300). The situation was so dire, they had to take up personal loans to pay employee salaries. Once bitten twice shy, they took great learning from the episode and continued their efforts to grow the business. 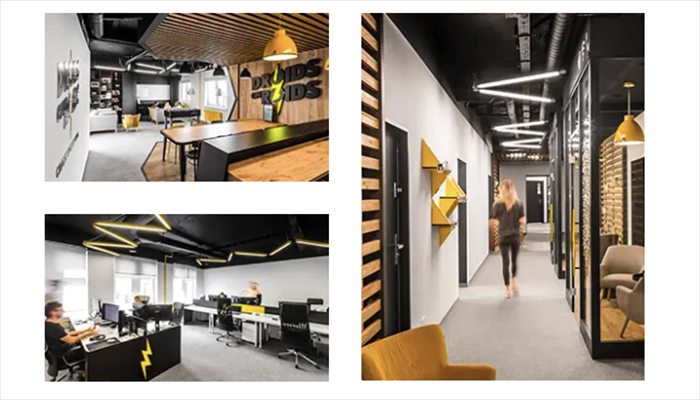 In 2011 Droids and Roids was a two-man establishment crammed on bean bags in an apartment. By 2019, they had matured 7-years into app development and made more than 20 million PLN. They employ a sizeable proportion of 50+ experts in emerging technological frameworks that collaborate over offices spread across Wroclaw, London, and San Francisco. 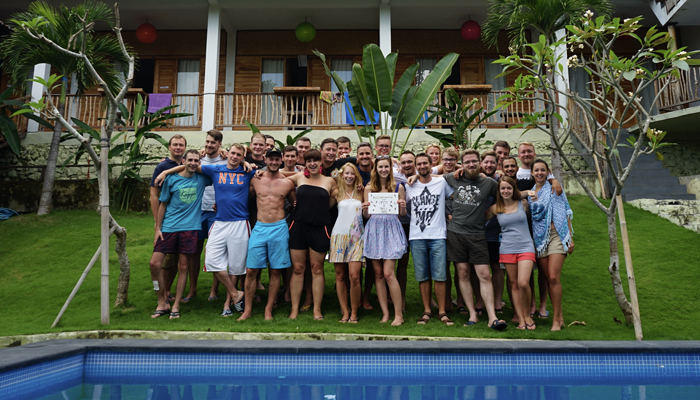 Droids and Roids lives up to the expectation that sets its name apart with a hip and  happening culture. Talent management is taken seriously with the founder pair understanding the nuances underscoring employee churn. They go to a great extent and only after a mutual agreement with the development teams pursue a project. The practice keeps the feedback mechanism flowing with juices and harmonizes the overall work ethic so much so that the team loves planning weekend getaways together. In 2016, they spent an excursion in Bali following which some people also got the chance to befriend each other in Morocco and Bieszczady.

If only there were few, they could be easy to list. Droids on Roids has been on the receiving end of numerous recognitions. Deloitte featured the firm as a Top 5 entrant on the Technology Fast 50 Awards (2017) for Central Europe as well as Technology Fast 500 EMEA for the same year. From 2013 - 2018, the company recorded 761% gains in its income and partnered with 107 clients. 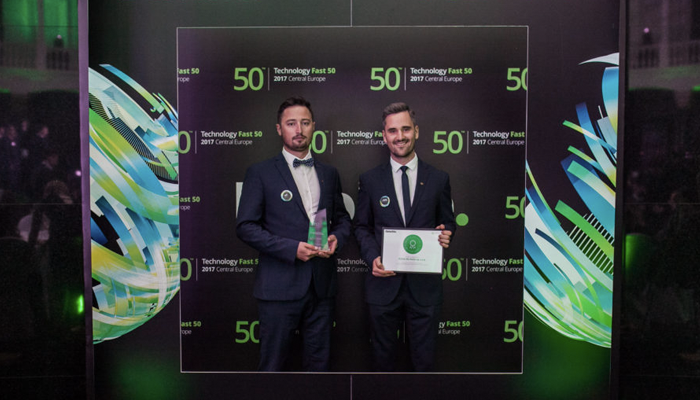 Noticing their growth rate, Forbes acknowledged them with a Forbes Diamond listing, accorded to companies with revenues between 5-50 million PLN. The publication also rewarded the founder pair Wojciech Szwajkiewicz and Tomek Muter with a Forbes 30 Under 30 entry. Product Quality at the firm is no less than indelible. For instance:

They created iOS and Android apps for CCC Shoes & Bags, the largest retail company in Central Europe. Their product won the e-commerce Poland Awards 2019 in the BEST IN MOBILE category. The app has 500,000+ installs to date.

Giphy Cam allows users to record and customize GIFs with sharable options across social media channels. It turns out, that the app has approximately 400 million monthly views, as of writing, and was also the 2016 Webby Award Nominee in the category for the “Best Use of Mobile Camera”.

Skybuds, the wireless headset maker, hired the Droids as their preferred technology partner, to create iOS and Android apps. Specialty functions built into the app enhance the listening experience for users.

While these case studies certainly stand out, in no way is their portfolio limited to the aforementioned milestones. They’ve continued to elaborate their catalog with uptrend technologies like IoT, Chatbots, etc. and if signs are anything to go by, they’ll continue to do so. 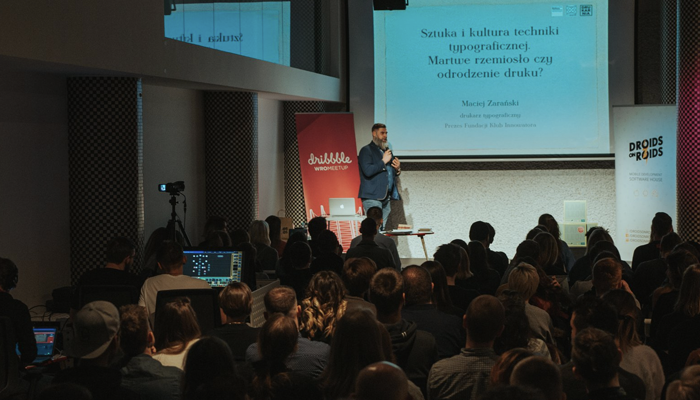 Dribble WroMeetup for designers in Wroclaw

The Droids actively coordinate Bootcamp training sessions and public Meetups. They train and shortlist fresh programmers and coders an average batch of which consists of 150 people. Following that, they offer 2-3 top performers internships in the company. In 2016, they inaugurated LET SWIFT Meetup for iOS developers, TOAST for Android developers, Dribble WroMeetup (from 2017) for designers, and the LogCat - Mobile Testing Meetup for QA testing professionals launched in 2019.

With the posted facts and figures, it is inevitable that Droids on Roids is destined to be one of the most influential consultants in the global app economy. They have the attention of leading media houses, who’ve recognized their level of technological sophistication. But to arrive at an estimate for their immediate and long-term goals, it is best we refer to Wojtek’s comments, “the headquarters will remain in Wrocław, but we are thinking about a greater presence in the US” .