Apple's App Store made $300 million on the New Year day 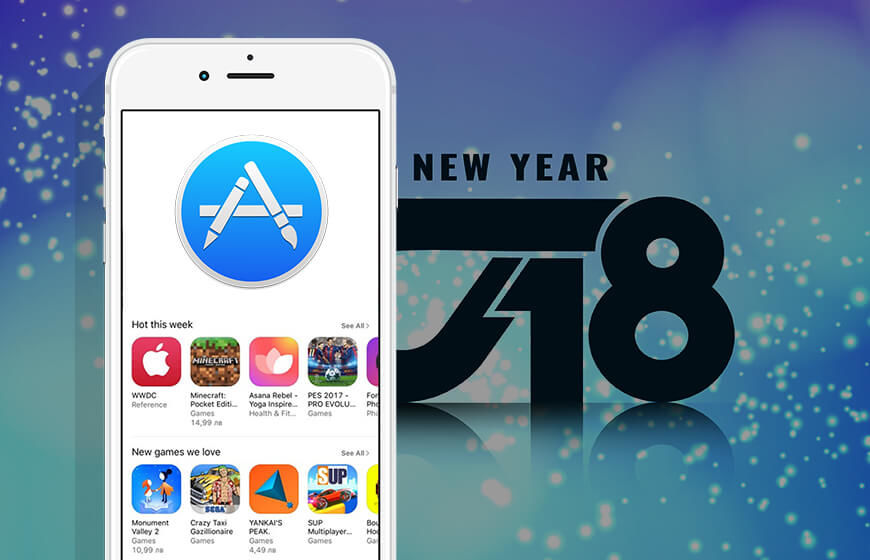 Apple released 2017 App Store report sharing all the financial figures and business that the apps have made throughout the year. The new year comes with a great business for Apple as apps made millions in the App Store. This holiday season with the New Year celebration gave Apple big reason to be happy. Putting aside all the talks about the tech giant throttling the iPhone's performance, the company shared its App Store record-breaking profits.

According to the report, during last week of 2017 i.e. from December 24th to December 31st, Apple customers spent $890 million on the iOS Apps. In addition to this, the very first day of 2018 had proven to be an ideal start of the year for Apple. Approximately $300 million of business made by the Apple’s App Store by breaking the previous year's record of $240 million. The maximum purchases and subscription done by the users on the January 1st, 2018 marked the beginning of Apple’s journey towards becoming a 1 trillion company.

The data shows that during the holidays period users spent millions over the iOS apps by either purchasing or subscription, that the company didn't give details about. Making a business of $890 million within a single week is truly remarkable. On the contrary various third-party reports have shown that the major portion of US smartphone users didn't download a new app per month.

Above all, Pokemon Go managed to retain the top position in App Store charts on December 21. The re-launched gaming platform with newly added AR features made the users love the game again. There is no doubt that revamped App Store and the introduction of iOS 11 helped the Apple to garner more profit in the last few months.

“Customers are now enjoying close to 2,000 ARKit-enabled apps spanning every category on the App Store. Among the most popular AR titles are games such as CSR Racing 2, Stack AR and Kings of Pool; shopping apps like Amazon and Wayfair; education apps including Night Sky and Thomas & Friends Minis; and social media apps including Pitu and Snapchat” Apple wrote on the blog. However Apple isn't the only one starting a new year with record-breaking numbers, Facebook also streamed 10 million of users live on New Year's Eve.

NEXT Best Android Hacking Tips And Tricks Of 2019

Apple Store app receives a new update in the form of its 5.0 version that comes with new options and a refreshed user-interface. The iPhone maker pushes the redesigned update Store app and claims it to be more personalized and informative than ever. The new search tabs and shopping features will hel

After imitating Snapchat Stories in early 2017, WhatsApp has garnered 450 million daily active users. In last year itself, WhatsApp eclipsed the daily users of Snapchat by the month of May. At present, WhatsApp has a total user base of 1.5 billion, which is clearly more than Snapchat and Instagram.