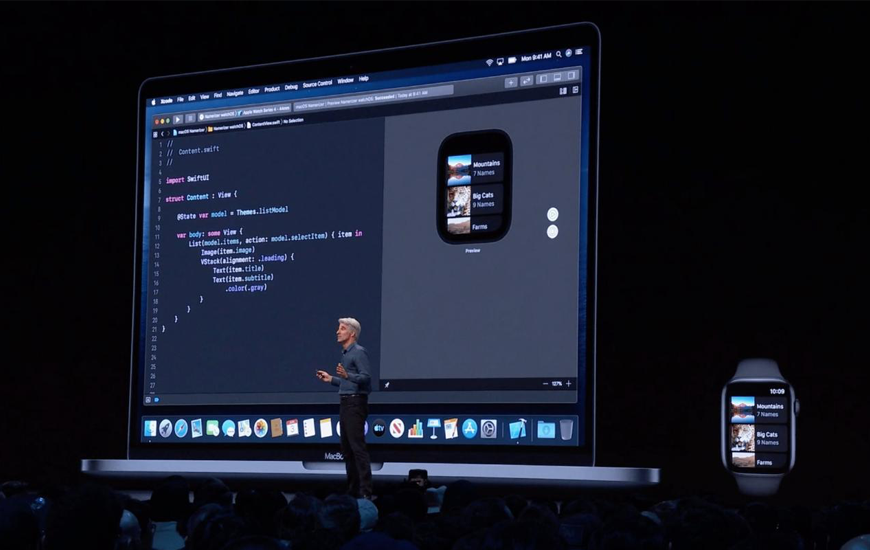 Apple recently revealed a bundle of innovative technologies at the Worldwide Developers Conference 2019. The highlights were the ones that can now simplify and speed up the app development process.

According to the company’s Senior Vice President of Software Engineering, Craig Federighi, the latest technologies for app development would turn app development into a fun thing, bringing about simplicity and speed in the process. This, he says, is going to define the future of app development across Apple platforms.

The biggest announcement was Project Catalyst – the new iOS-to-macOS converter that is going to open new avenues for iPhone app developers who love working with single source codes. Yes, building many apps with multiple source codes is now passe.

Among the newest inclusions are SwiftUI, ARKit 3, Reality Composer, and RealityKit designed to make it simpler for developers to create user interfaces and AR experiences that are compelling and more powerful than ever.

APIs and new tools would now simplify the way iPad apps are brought to Mac. Any update made to Create ML and Core ML would now make on-device machine learning apps more smooth-running.

Overall, the conference has been every app developer’s dream come true!

Here are the highlights:

Swift has always focused on a faster, easier, and more interactive UI development with an innovative framework upping the vision. In this regard, the new SwiftUI provides an intuitive user interface framework for developing advanced app UIs. 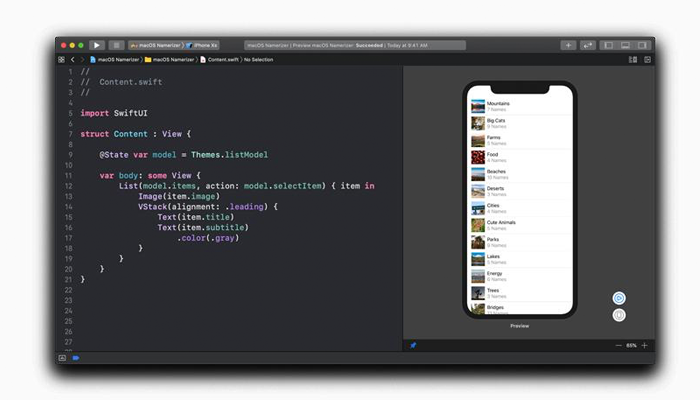 Developers can now use declarative codes that are simple and easy to understand. The same can be applied to create an impressive UI that’s featured packed and comes with buttery smooth animations. Additionally, developers can enjoy the convenience of automatic functionalities such as Dark Mode, interface layout, Accessibility, internationalization, and right-to-left language support.

This apart, SwiftUI apps are super fast and run natively without changes or intermediary software layer support. The best part is it is the exact API that’s typical of iOS, iPadOS, macOS, watchOS and tvOS. This makes an easy breezy task for developers to build natives apps quicker than ever.

Learn about the difference between native and hybrid apps here.

SwiftUI comes alongside a new version of Xcode 11 - that now includes a graphical UI design tool allowing developers to build a new user interface without having to write codes.

The latest Xcode 11 now comes with a new UI graphical design tool. The latter is a helping hand to designers who wish to use SwiftUI to assembler user interface real quick – without having to write codes. Yes, you can expect automation here.

Also, whenever an auto-generated Swift code is modified, developers would be able to see the UI changes in the visual design tool, too. In other words, developers would now be able to keep a track of all changes and preview possible ones in real-time, which they can directly run on connected Apple devices.

This process, too, would be automated; it would immensely contribute to how the UI will undergo changes as the code is assembled, tested and refined. It will further allow developers to check the live status of how the app responds to multi-touch and how it behaves with a camera and onboard sensors.

Such fluidity between graphical designing and coding would surely up the game of UI development.

With the new ARKit 3, augmented reality has turned more immersive. It now places people at the center of AR, bringing them Occlusion, Motion Capture, and more! People’s movement can now be integrated into apps, thanks to Motion Capture. AR content can be pushed to the front or the back of people by dint of Occlusion. 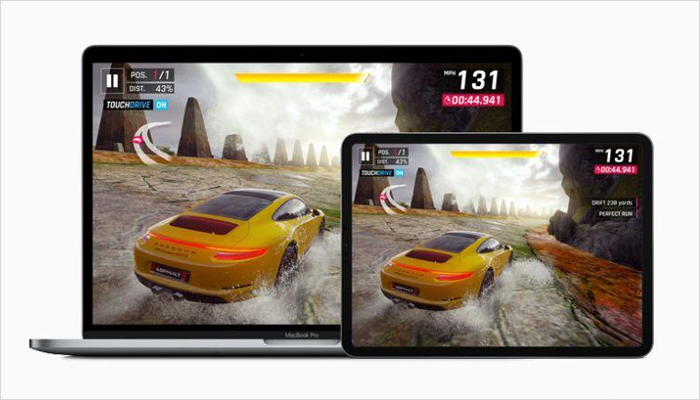 Up to three faces can now be tracked with the front camera enabled in ARKit 3. And then, there’s simultaneous front and back camera support along with collaborative sessions which makes shared AR experiences even more fun. This is pretty amazing.

The RealityKit enables high-performance 3D simulation was built to support AR. It nearly brings down the wall between virtual content and reality with its incredible animation, photorealistic rendering, environment mapping, spatial audio, and camera effects like noise and motion blur. With the new RealityKit Swift API, developers can control their capabilities.

Also, there’s Reality Composer that has been built to enrich 3D content in AR. A powerful app, this one is supported by iOS, iPadOS, and MacOS and allows developers to prototype fast and prototype well. Even if they come with zero 3D experience, they can still manage to produce impressive AR experiences.

How? By using a simple drag-and-drop interface and a rich library of animations and 3D objects that are beyond excellent! The app enables developers to move AR objects so they build an AR experience, which can be directed to an app in Xcode without fuss or exported to AR Quick Look directly.

The WWDC 2019 has given developers the much-needed APIs and tools that simplify the way iPad apps are brought to Mac. Using Xcode, an existing iPad project can now be opened and fundamental Mac and windowing features included automatically by checking a single box.

Also, elements unique to the platform can be adapted to build a native Mac version of the app. Because the source code and project are similar to Mac and iPad apps, changes are the same in both app versions. This saves not only time but also resources.

Needless to say, natural language processing, object detection, and speech recognition would be at the core. Core ML 3 would allow developers to tinker with the on-device machine learning models with personalized features without putting the privacy of users in danger.

On the other hand, Create ML is an app dedicated to machine learning development. With it, developers would be able to create other models without writing a single code.

The latest watchOS 6 augments the capabilities for Apple Watch. The tech giant has also brought features like cycle tracking, activity trends, noise app, and app store right on your wrist! From now on, health and fitness are going to be a different story altogether.

You can check out the best apps for your Apple Watch here. 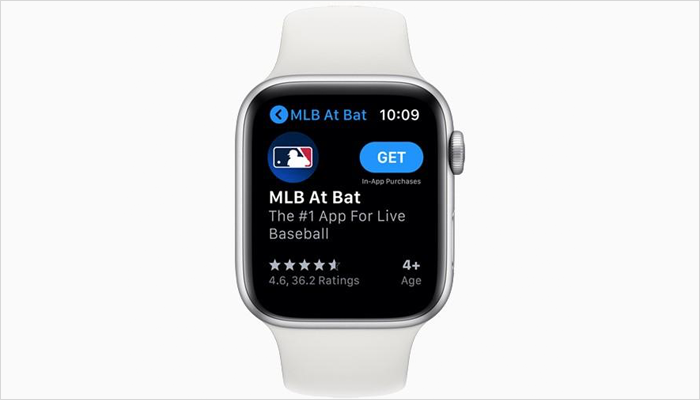 App developers can now create apps for Apple Watch that can function independently, even in the absence of an iPhone. They can also use Core ML to leverage the Apple Neural Engine on Apple Watch Series 4. We see futurism here; you can look forward to apps that are more intelligent than before.

There’s also a brand new streaming audio API that would enable Apple Watches to stream music, radio, and podcasts from third-party media apps. Also, an extended runtime API would allow apps more time to perform session-based tasks while the app runs in the foreground. This would happen even if the screen is off. Sounds unlike Apple, doesn’t it?

Sign In with Apple helps users sign in to devices, apps, and websites using their unique Apple ID. WWDC 2019 revealed Apple’s plans to make this login system mandatory for all apps that rely on third-party login. To that end, any app that makes use of such login systems will now have to add Sign in with Apple without failing.

Although this sounds a little aggressive, Apple seems to be focusing more on user privacy with the new login mechanism. It is likely to be on its way to rebranding itself as a privacy-first company, which is, by all means, a good thing.

Other Highlights App Developers Would Love

Apart from these groundbreaking technologies, Apple also revealed other features that include…

The WWDC, Apple's annual developer fest, saw some major mind-blowing updates. The company also announced updates for iOS 13, iPadOS, macOS Catalina, and tvOS 13. It further introduced some premium Mac hardware. And yes, it also gave farewell to iTunes this time. But, most of all, what stole the show was its focus on making app development a cake walk. That was perhaps the biggest takeaway!

The Who, Why & What of developing a Minimum Viable Product in 2021

Peer-to-Peer Mobile Payment Apps And Their Role In 2021

After witnessing the major events throughout the year, we can say that Digitalization has been the buzzword of the year. Entrepreneurs are coming forward and digitizing their businesses because that’s the need of the hour. And one of the things that are helping them achieve that aim is Peer-to