The inclusion of elements like obstacles and mystical tombs makes it one of the best solitaire apps of all time.

It doesn’t matter if you are a gamer or not; you must have come across the term ‘solitaire’ in your lifetime. Solitaire is a genre of card games that is super popular in the gaming community. If we look back, the dawn of Solitaire game dates back to the 19th century.

So when you have a genre that is already sought after by the gamers, it’s always wise to try your hand in the same.

Solitaire Time Warp, a card game developed by Sto Co, is a fantastic app that allows you to play card games with a time-traveling twist. The game requires the user to follow a cranky kitty through space and time while unleashing his card skills.

“We have taken the somewhat static concept of solitaire and turned it into a highly addictive game that both card players and action gamers will love. With literally hundreds of uniquely challenging levels, Solitaire Time Warp will continue to hook players again and again. Plus, we are continuing to develop new worlds to explore and are really excited about what’s coming next.”

Unlike the regular solitaire game apps, the Solitaire Time Warp app is set in vibrant environments to keep users excited throughout the gameplay. Let’s straighten out and know what’s so exclusive about this best solitaire app.

Solitaire Time Warp is a free online solitaire app that is not just limited to card games but also combines time travel through the pharaoh’s tomb of Ancient Egypt and the river Nile. For instance, you can play Yukon Solitaire in the visually stunning underwater world of the Lost City of Atlantis and find a way to the next world.

Solitaire card games are packed with special cards, unique challenges, and obstacles and that makes the app one of its kind. While playing solitaire online, you also unlock new levels, fun bonus games, and unique challenges.
.
The following are the various card games that you can play in the Solitaire Time Warp app:

The app has different levels with their difficulty levels and the best thing about it is that new levels are added on a regular basis. With the increase in the difficulty level, you also get a chance to explore space and time with your companions. The difficulty level further introduces special powers that can be used to overcome new obstacles.

The Time Warp solitaire game app comes with a lot of exciting and melodramatic features that make it stand out among other simple solitaire apps that are available on the app stores. Take a look at the solitaire online app features:

The solitaire app has its own world that is blended with art, music, and style in the mystic sphere of Egypt, Atlantis, and China. Each of these places is stacked with different solitaire levels and there is more coming.

2. Solitaire With a Twist

Card games are known to be played in a calm environment, but here in Solitaire Time Warp, you will come across obstacles like locks, bombs and card eaters that will make it more challenging for you.

The free online solitaire games include special cards like wilds and plus five cards to add that extra punch. Besides, you always have the flexibility to use the streak meter to earn the extra perks.

Any game is incomplete without rewards and the Solitaire Time Warp app won’t disappoint you either. There are bonus games that can confer you with free plays and extra coins. Then there are daily and hourly bonuses to pump up your gaming streak. 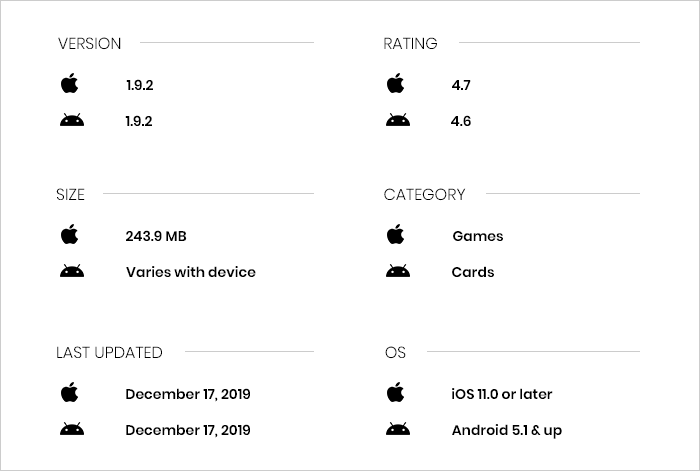 Solitaire Time Warp app is free to download and play solitaire games. To propel your gameplay of cards, the app offers an in-app purchase option of coins that can be used to undo option, play different levels, and buy additional active cards. You can get more coins for the active cards that are left unused after every game.

By playing free plays, bonus coins can be earned on a daily and hourly basis.

If you love playing solitaire games, Solitaire Time Warp app should be on your smartphone. The app is a must-try solitaire for beginners because it offers fresh experience on an old classic. You get different worlds to explore and experience the mesmerizing art, music, and style. Its plain sailing gameplay, coupled with challenging obstacles, makes it an addictive experience.

On top of it, unlike many other shoddy apps, this safe solitaire app has made its own mark among gamers thanks to its fairplay game algorithms.

The following are the tips that you need to keep in mind while you play solitaire app:

So, play free online solitaire games and guide the pesky pussycat to find his way.