A secure message app that protects your privacy and doesn’t share your data with the third-party. Signal app encryption doesn’t ask for unnecessary data to work.

Signal, launched in 2014 by Open Whisper System, is an open-source messaging app that allows users to send encrypted text messages and voice memos, and make video calls using the internet.

In recent privacy updates, WhatsApp has faced some questioning and mistrust of its users. Moreover, this has resulted in a boost in the popularity of the Signal app due to its privacy policies. We will discuss that further in detail.

Users can also send regular text messages to non-Signal contacts, but they will not be encrypted. The encryption based messaging app has over 10 million users and unlike WhatsApp, it doesn't share your data with Facebook for ad targeting. 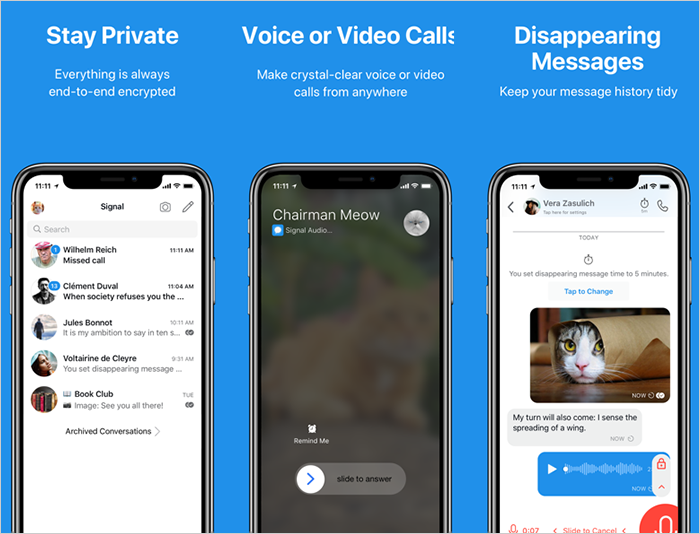 The Signal messaging app was created by Moxie Marlinspike, an American cryptographer. He created the app in 2014 and released it initially. Moreover, Marlinspike founded the Signal Foundation with Brian Acton who had left WhatsApp in 2017.

How to use Signal Private Messenger App?

Messages sent to a Signal user can only be decrypted by the recipient(s). This eliminates the access of a third-party data overseer to your messages.

Similarly, all stored messages on Signal are also encrypted. This way even if someone got hold of the recipient's phone, without the owner’s passcode, they cannot access the stored messages.

Back in 2016, security researchers ran a full and independent audit of the Signal text app and found the app to be cryptographically secure.

Unlike Whatsapp, Signal doesn’t store any information on you except your phone number, random keys, and profile information. The Signal app secures even your IP address and makes sure that it doesn’t get shared with third parties. As for information sharing, like any encryption-based service, Signal secure messaging can and will hand over any information that the government legally requests, but considering Signal doesn’t store much data on you, it’s the most privacy-friendly messaging app in the market.

Signal Messaging App is entirely free to use for Android and iOs devices. The app charges no subscription fee or any price for messaging and its other features.

The Signal secure message app can be downloaded on Desktop devices as well. Moreover, you can sync your smartphone app and desktop app to use it anywhere you want.

Like most iOS and Android app users, you would think that since WhatsApp offers encrypted messaging services, all your information is privacy protected with this app.

If we consider the privacy of the user, WhatsApp’s new privacy policies have raised new concerns amongst the public. Now, there have been talks about Signal encryption and Telegram policies being better in terms of privacy of the user in comparison to WhatsApp. So, we are comparing these three apps and their user data requirements for your reference and we will also tell you why Signal messaging app security is comparatively better. 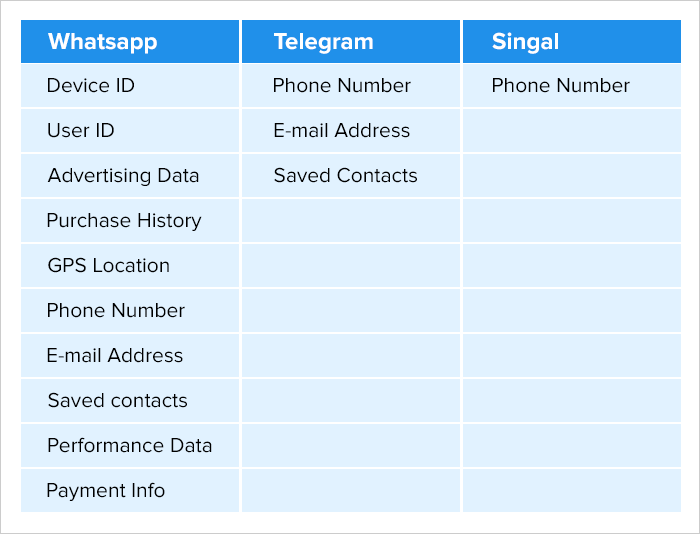 A closer look at WhatsApp’s privacy policy reveals that unlike Signal, WhatsApp stores a lot of information on you including:

Another key concern with WhatsApp is that it backs up your data, by default. And, although, you could disable your backup, most users don’t. Hence, giving their chat history, to the Google or iCloud account, without realizing it.

Finally, as I mentioned earlier since Facebook owns WhatsApp, the data you share can be used for ad targeting. And, although you can opt-out of it, this little fact is worth noting.

Signal Message App has existed in the market since 2014. However, other messaging apps like WhatsApp and Telegram have been giving it a touch competition. The reason is its limitations of features. On one hand, the App is gaining popularity due to Signal messenger privacy policies, the app has still a long journey ahead in terms of funky features modern generations love.

If you’re looking for a private messaging app for iPhone or Android, Signal is the best option out there. We chose to include a signal messaging app review, for several reasons that go beyond encrypted messaging. Unlike other encryption-based messenger apps, Signal instant messaging has always kept itself open-source and transparent, which means users can be sure of what information is Signal withholding. This becomes especially relevant in today’s time when data is the new oil, a billion-dollar industry that’s using user data with or without veiled consent.

Even the tech guru Elon Musk has shared a signal messenger review  on his Twitter account. After new updates from WhatsApp, Elon Musk tweeted and asked users to “Use Signal''.

It’s important to note that while there are plenty of secure messaging services, none offers a transparent ecosystem like Signal messenger security. Finally, if you are a developer and want to get your app reviewed, contact our experts of MobileAppDaily, and they will assist you with the same.