Shazam: An App to Identify Music Around You

Shazam app lets you explore, discover, and share the music tracks you love.

Song identification was quite alien until a few years ago, but with the release of services like SoundHound and Google Sound Search, things got changed for some good. It was plain sailing than ever to put a name to the songs which randomly come across. In between all this, Shazam is a name that is persistent and is followed by millions of people across the globe.

Shazam is a fantastic mobile app that recognizes songs just by its lyrics. Its music identification feature helps you to capture and share the music and TV you love.

The journey of Shazam is quite exciting. It took the Shazam music app 10 years to reach 1 billion tags and then, there was no stopping it. In the next 10 months, it reached 2 billion and 3 months to go from 10 to 12 billion. The turnover itself sounds electrifying. Shazam has connected more than 1 billion people till now and still, it’s going strong.

Shazam was founded in 1999 by a team of people, which included Chris Barton, Philip Inghelbrecht, Dhiraj Mukherjee, and Avery Wang. On 24 September 2018, Shazam Entertainment was acquired by Apple for a reported sum of $400 million. Before its acquisition, Shazam Entertainment raised a total of $143.5M in funding over 14 rounds.

Let’s get at the depth of it and get the hand of all features and functionalities here in our comprehensive Shazam app review.

Shazam is a convenient music identification app that can easily be counted as one of the best lyrics apps. Shazam’s new and innovative ways to delight its users are simply astonishing. There are innumerable tracks that you can discover on this song lyrics app.

After installing the app, you need to sign up. One of the best things about the Shazam app is, it doesn’t necessarily require you to log-in to use and still use the app. Coupled with high-resolution squared thumbnails, the app has a transpicuous and white interface that makes it effortless for the user to navigate. Broadly, the app is carved into  four pages:

You also get an option to follow artists and experience what the artist himself is Shazaming. Once you Shazam a song, the new discoveries from the same artist gets automatically compiled. Granted that, the music lyrics app keeps you up-to-date about new singles, videos, and albums, from the artists you follow.

The following are the conveniences that come along the Shazam music app:

Notably, apart from the Android and iOS devices, Shazam is also available on Mac, Apple Watch, and Android Wear, as well. 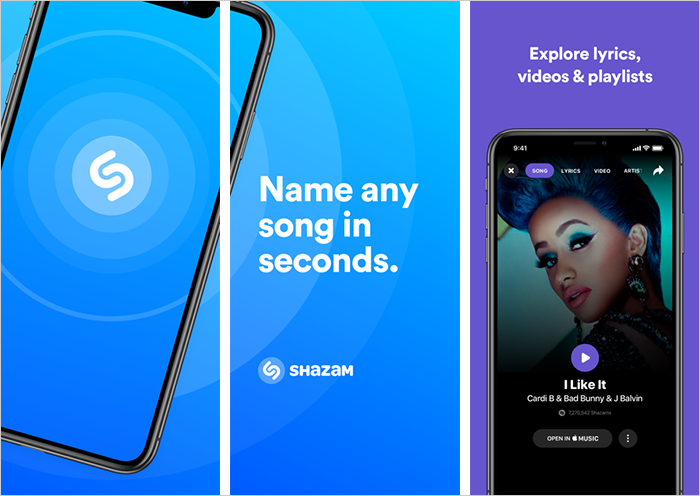 How Does Shazam Work?

Shazam app for Android and iPhone is one of the few apps that lets you find songs by lyrics, which is no less than a miracle. And if we go into its fundamentals, striking bewilderment is assured. The team behind the development of the Shazam app has itself acknowledged that the basis of the app’s model is a frequently asked question.

So to untangle the mystery of the Shazam app, we have come up with a quick summary that can be split into three steps:

Let the Shazam function, until the magic happens.

Not only this, but the app also comes up with the concert tickets for that particular track and pops up the recommended tracks that you may like.

Notable features of the Shazam App

As notified before, the Shazam app is just not limited to song identification, you can preview songs and add them to Spotify and Apple Music Playlists, as well. Take a look at some of the most sought after features of this music recognition app for Android and iOS:

The app lists real-time charts and helps you know what’s trending and what’s popular in your region and the world. You can even check out recommended tracks to discover new music. To cater to the music interests, there are quick links to Apple Music and the iTunes store, which can be sync back to Shazam to play full tracks.

If you own an Apple Watch or any Android Wear, you can Shazam any song in seconds, right from your wrist. There is also an option that lets you see all your past Shazams right on your smartwatch.

Shazam employs visual recognition technology that can be used to buy tickets for the concerts of your favorite artists. Simply tap the camera icon on Shazam magazines or posters and the relevant details will be displayed on your device screen. It can be used anywhere where you see the Shazam camera logo.

Another striking feature of this music lyrics app is that after Shazaming a song, if the app is not able to discover, it keeps the song in the database and once it’s updated, the app lets you know. 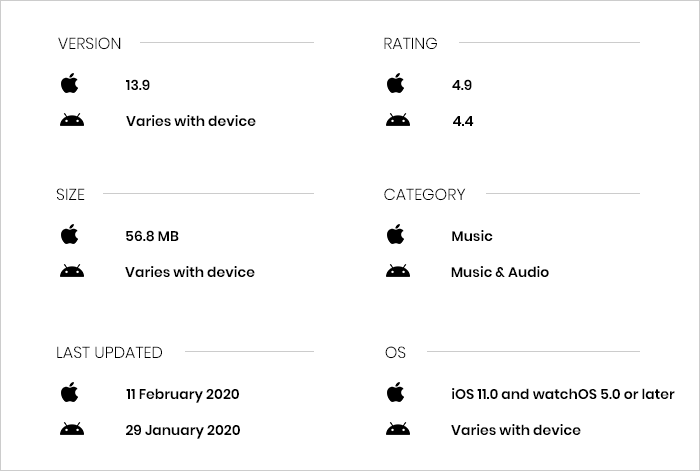 With this, we come to the conclusion of the Shazam app review. The music lyrics app is absolutely fun to use. If you are a first time user, it will surely surprise you with its ability to recognize the song playing in your background.

Shazam app is free to download and use, but it comes with in-app advertising, which may irk some users. To do away with the advertising, you can go for the paid version of the app, Shazam Encore, and there will be no more intermingling.

However, there are some concerns that need to be addressed, or at least, it should be known to the user. If the app is left running in the background, it continuously uses the GPS, which can further take a toll on the battery life. Then to deliver interest-based advertising, Shazam has the policy to share the users’ details like messages, text, files, images, photos, sounds, and profiles with the advertisers. It can upset a few users. Hence, it’s advisable that before using the app, you must go through all the access that is required to function the app.

Acutely, some features of the Shazam app for iPhone and Android are device, location, and app version dependent. So if any Shazam function is not working on your device, you may put it on your device or location.

Other than all these issues, the song lyrics app is a dreamboat for all the music lovers. If you have a similar app, it’s time to get your app reviewed and garner the traction that you were missing earlier.