From optimizing layouts to highlighting the most-used apps, this launcher app can handle it all.

Thanks to Android, an open-source software, almost everything can be customized in the Android OS and it includes the launcher segment as well. If we set the Android Pie aside, all other versions of Android OS didn’t provide much of the option to customize the home screen and other widgets.

Even in the latest Android OS update, there are many restrictions that don’t really allow users to make changes beyond a certain point and here comes the role of Android launchers. Nova Launcher is one such customization app for Android that has been around since 2011.

Summary About The Nova Launcher

Over time, Nova Launcher has been packed with all the new and updated features it rightly catered to the needs of its users, and for the same reason, Nova Launcher is considered as one of the best Android launchers in its league.

The 2018 version of Nova Launcher was an absolute gem, as it was integrated with an ultra-customizable version of the interface of Google’s own phones.

The Nova Launcher is one of the top-notch Android launcher applications with unending customization options. Once the user gets going, there is no dearth of options that can be used to shape the Android device's home screen. 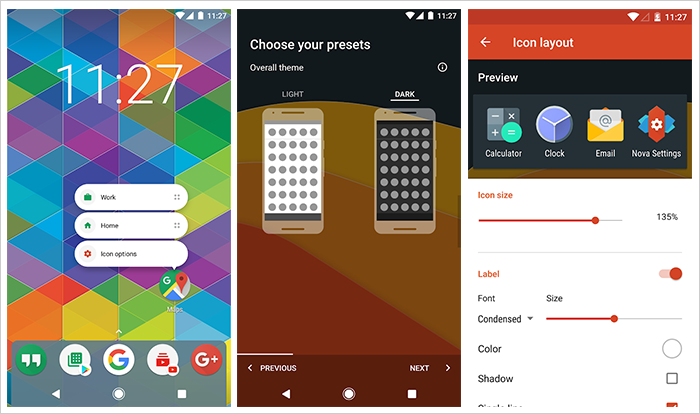 Notable features of the Nova Launcher

Below are some of the primary features that are offered by the Nova Launcher Android application, which are as follows:

All in all, the further you go into the app, the more options will be there to explore. For example, Nova launcher has a Night Mode feature which comes into action according to the time of the day, elements color, icon shapes, and customization of font spacing and size.

The user can change the layout of the app drawer from horizontal to vertical style, with a further option of stacking it in a Google-style arrangement and a longer alphabetical list.

How To Get Started With Nova Launcher?

Upon downloading the Nova Launcher app, the user needs to pick whether to set up the app drawer with a swipe or even a button. After that comes the option of the light and dark theme.

But before that, the user is greeted with a short set up tutorial of the Android launcher app that assists the user in grasping the basic characteristics and helping the user to get started.

Once the choices are made related to the theme colors and app drawers, they can be altered later on in the menu.

Then comes the plethora of options to customize the home screen, which generally has a lot of empty space and can be arranged accordingly. Furthermore, apps can be stacked in folders and have the option to add desktops, widgets, and more.

What is Nova Launcher Prime?

Nova Launcher Prime is altogether a different application, but it is indeed an extension of the popular Nova Launcher app that has many new features, apart from the exciting feature of the primary launcher app.

Nova Launcher has its Prime version available that can be unlocked by paying a fee and as the prime version, it packs some additional features like app hiding and gesture shortcuts.

Key features of the Nova Launcher Prime version of the app:

With so many features and functionalities of the Nova Launcher, it automatically becomes a favorite pick to customize the Android screens. The one thing that adds an extra edge to this Android Launcher app is the fact that it perfectly aligns with Android's Material Design and fully blends with the overall design of Android.

The other thing that comes handy for the user is the availability of a number of options that can be availed at any time and in case, any option fails to please the user, there are similar functionalities present in the app itself, which is a great inclusion.

The app regularly gets updated by TeslaCoil Software developers. So, if you are looking to add more customization options to your Android smartphone, Nova Launcher seems to be one of the best Android Launcher apps.

Also, if you are a tech enthusiast who is always interested in knowing the latest updates from the mobile app industry, make sure you are subscribed to MobileAppDaily. Being one of the leading tech-based media portals, we regularly release descriptive app reviews of trending iOS and Android applications explaining their functionalities to our readers.