An old adventure game with a modern day 3-d twist.

In a life and lifestyle full of stress, Mobile Games and their Intricate worlds seem to attract millennials no end. They tend to enter these worlds as a character they may like and become a part of it; sometimes even forgetting the issues they may be facing in real life. For some it might just be a game; but for the gamers it is their passion, their solace and their own separate world, wherein their favorite storyline is weaved intricately offering them space for combats in this world of adventure and adrenaline. Adventure of Mana is a massively multiplayer online role-playing game on similar lines, that successfully captures and manages to withhold user attention.

An Adventure Story-Line Close to Heart, Closer to Reality..

Adventure of Mana is one of the most famous rpg games (role playing games) in the mobile markets nowadays. The game is a 3-dimensional remake of ‘Final Fantasy Adventure’, a game by Game Boy which gained fame in the gamers world in the year 1991. Developed under the creative idea of Mr. Masaru Oyamada, the producer of the game and a true believer of transforming the various Mana gaming storyline into latest technological formats. Adventures of mana is the remake of the first launch of the initial series (Mana Series), which in effect today is a massively multiplayer online role-playing game.

Adventure of Mana was launched on 4th February, 2016 for both the android as well as the iOS platforms. In line with the latest technologies and its futuristic scope, this rpg game online has been developed in 3-dimensions to give the user a new realistic look and feel of playing the game in its newer form. The gamer enters this new world that enchants him or her through its technologically doctored audio and visual effects.

The overall look of adventures of mana walkthrough looks impressive to say the least. Its sharp characters that have been intricately pixeled for maximum effect and grace, look phenomenal. Though, the storyline of the initial role playing game has been kept the same, the combats, powers, areas and levels have all been developed for good. Thus, the adventure level is also greater.

The player travels through the world of this best android game at will and traverses through its various areas and dungeons. The controls in Adventure of Mana are maneuvered through a powerful joystick that can be placed anywhere on the screen for easy movement of characters and functionalities. The game gives a feel of actually entering an ancient world of monsters and dungeons. The overall experience of Adventure of Mana gameplay has been taken to a new high.

Role-play has proven as one of the best and one of the most attractive forms of gaming.  Adventure of Mana  is one of the best free android games that does not disappoint in any vertical. The concept allows players to enter within the game as its lead characters that deal in sword combats (the traditional feel is still there). The character, along with the heroine and friends, is then required to kill various monsters and cross through several levels to defeat the villain (Dark Lord of Glaive), with the help of powers and friends, integrated on the way.

Let us now enumerate the features of this one of the best free offline android games:

You can have a sneak preview of this online role playing game here:

Adventures of Mana makes for a highly exciting 3-dimensional game that has the prowess of completely capturing user attention. The banner saga app with its exquisite looks and music takes the gaming experience tends to capture the heart and mind of the user completely. The new audio and video feels of the game are more than awesome, wherein the user tends to feel closer to the characters and the gaming world. Despite the price tag involved, it is a solid game with great graphics and a fun to play storyline with well polished extensions and is free from any ads or micro-transactions. Mobile AppDaily is a comprehensive platform that provides complete information about the usability, efficiency and market presence of the various applications entering and exiting the virtual space of the wide web. It includes a separate section of app reviews that ensures that the user gets the complete information and insights about these apps and their utilities. 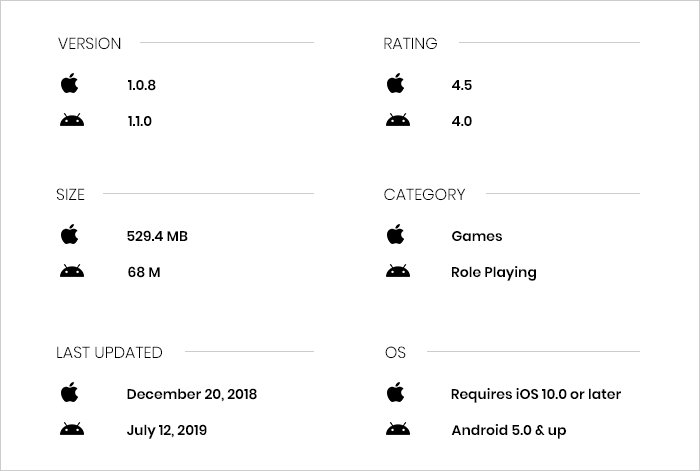