From dark mode to photo feature, learn about the differences between iOS 13 and Android Q operating systems. 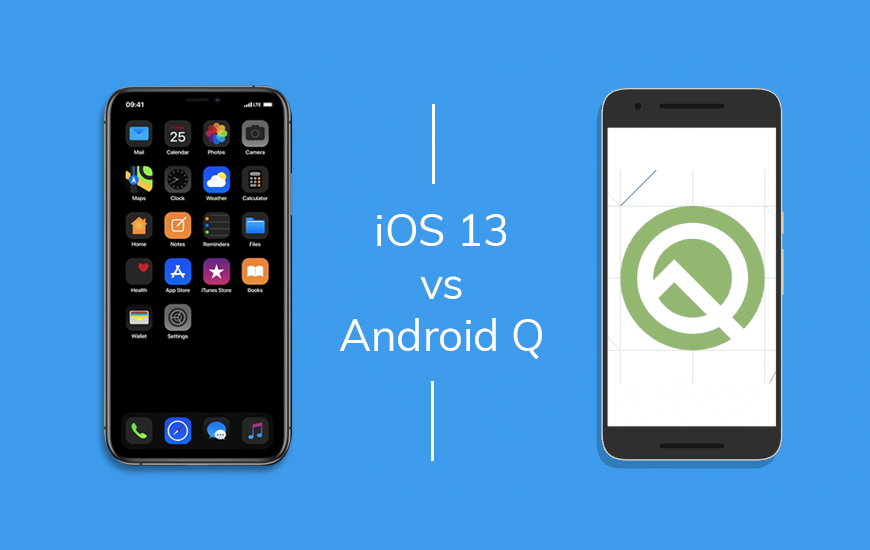 The most heated arguments in any field of the world is the ‘which is better’ or the ‘this versus that’ argument that takes place between all the market players of any industry.

Every year that new operating systems are launched it sparks a new debate between which one amongst them will be a winner when it comes to consumer sales. For any mobile application development company, this means a significant issue.

Last year, it was iOS 12 versus Android P. This year, with the recent announcement by Apple to launch iOS 13 on their new iPhones, the debate has only just begun if this will triumph over the 2019 Android version of Android Q.

Apple also announced that iOS 13 would be, for the first time, available in a beta version completely unlike its previous versions of the software. After the announcement, it is only now becoming available for app developers and will be out for public use beginning July.

Android Q, on the other hand, is in its four betas and has been available for months now. However, Android Q’s final release is being pushed by Google to the fall this year. This means that the comparison we are about to make would be the basis of the features that Apple displayed at the developer conference recently and the ones that we have so far seen on Google this year.

Bringing in these new changes in the versions mentioned above means that the iPhone and Android app development companies have to toil and work a long way to bring it out to the public. It is certainly quite imperative that these companies hire the best app developers to help you create experience services that are top notch and up to their standards.

Developing a mobile application is a niche but a very productive industry that helps the developers excel in both Android and iOS software in the field of hybrid and Native app development. Having a good mobile app company helps one develop cross-platform applications that can run for Android as well as iOS successfully.

Apple has always made privacy a key selling point when it comes to any of its products. Their business is mainly dependent on generating revenue through their hardware, apps and services they offer their customers, unlike Google who finds it tougher to increase their privacy restraints since their major source of revenue is due to its advertisement business, which is the basis of what exactly the end-users search for and  based on this data, the videos they consume.

Apple recently announced that it would be providing its customers with more control of their privacy in terms of location permissions on apps, a new sign-in method and a mandatory ‘Sign in with Apple’ option on their products. Every iPhone app development company is looking forward to it.

Google, too, through Android Q, is giving end-users somewhat more control over the information that they share via different mobile apps and online services. A great example of this is the Chrome browser that tends to go unsteady when it comes to ad-blocking and using privacy extensions amongst others.

But since they cannot extend their privacy restraints because of revenue generation, Apple iOS seems to be ahead when it comes towards keeping up with privacy matters.

A dark mode is not just a better experience from the bright white light hitting the eye but also helping to preserve battery life via lighting lesser number of pixels on the smartphone screen. Earlier this year, Google introduced dark mode in its pie update, but they haven’t made the theme available anywhere.

In earlier versions of Android Q beta, the theme of this version can be said to be more evenly distributed across the entire operating system. Some of its apps, like the Gmail app and Chrome browser, still function in the bright white light lacking the dark mode there. Android app development services should consider this feature during app development. Apart from this, there are many more top-notch apps like Slack that have integrated the dark mode feature.

Apple has held more expertise specifically in this area since they first tried out dark mode on their desktops and then amalgamated it in the Mac OS Mojave in 2018. In the iOS 13 update, Apple is bringing forward a dark theme that will be uniformly applied across wallpapers, widgets, notifications to calendars and messages etc.

Google offers a wide range of services to its customers in relation to taking pictures, editing images and sharing photos. It combines effortless backup functionality with powerful photo sharing features and easy-to-use image editing tools to make the best picture for you. The feature of Night Site mode on Google Pixel itself is enough to tip the scales in favor of Android Phones. Google also gives you the first 15 GB of online data storage free as compared to Apple, who only provides 5GB.

Apple Photos are rich with editing tools, and this includes the ability to adjust the intensity of portrait lighting with the help of a slider. It is unequalled at recognizing different faces, objects as well as scenes to help the user sieve through their pictures. But unfortunately, most of its power is only available to Apple’s users.

4. Running Mobile Apps on other devices

Apple had last year announced that they would be transferring some of their own iOS applications to Mac OS, which was known as Project Catalyst. Apple said this year they would be letting iPad users get their apps to Mac, which also helps developers who can easily build an application that runs across Apple devices, as Mac users potentially get access to a richer and higher-level selection of iOS applications.

Google lets its app developers move software between different platforms, like providing various owners of recent Chromebooks with access to Android Apps through the Google App Store. But these services also require an internet connection, and in addition to that, they also lack the popular Windows applications such as Microsoft Office, Adobe Photoshop and many more, which basically limit this option.

Although the tech giant Apple may have been the first company to introduce a voice assistant back in the year 2011 with Siri, it has done very little to enhance the service over the years.

In an iOS 13 upgrade, Siri also gets a brand new robot voice that deterministically picks up a few new tricks like searching for WatchOS on the users’ Apple Watch and being able to quickly respond to a wide range of incoming messages through the users’ AirPods along with various stream radio stations. Also, iOS 13 version will also come with a number of preloaded Siri Shortcuts.

However, Siri is no competition to the Google Assistant that recognizes and distinguishes between voices and different commands. Google Assistant is also completely integrated closely into everything the user does on their smartphone and can proactively help to make some recommendations by referring users’ calendar and Gmail accounts for upcoming reservations as well as appointments.
Siri’s performance is underwhelming because of its limited database that is off the internet, whereas Google rules search.

With the rise in the number of iPhone users, a large number of businesses and organizations are reaching out to the iPhone app development companies to deliver best-in-class products.

Android App development is turning out to be one of the leading and focused trends of the industry. with the rise in digitization and a massive shift in consumer behavior, a huge number of apps are being launched regularly.

The industry of iPhone App developers, too, has received a big boom in recent times. It started small and is now leaving its imprint even in diverse industrial spaces.

The usage of iPhone app developers is such that it helps you reach a wider audience and is also a challenge to hire an efficient and reliable expert from the team of iPhone developers. These developers can work in various fields of app development like gaming or enterprise development or even the UI/UX app design.

Also, if you like reading such interesting articles on trending technologies related to mobile app technology then make sure to follow MobileAppDaily by clicking the ‘Subscribe’ button now.

PREVIOUS What is Internet of Things (IoT) and How Does it Work?