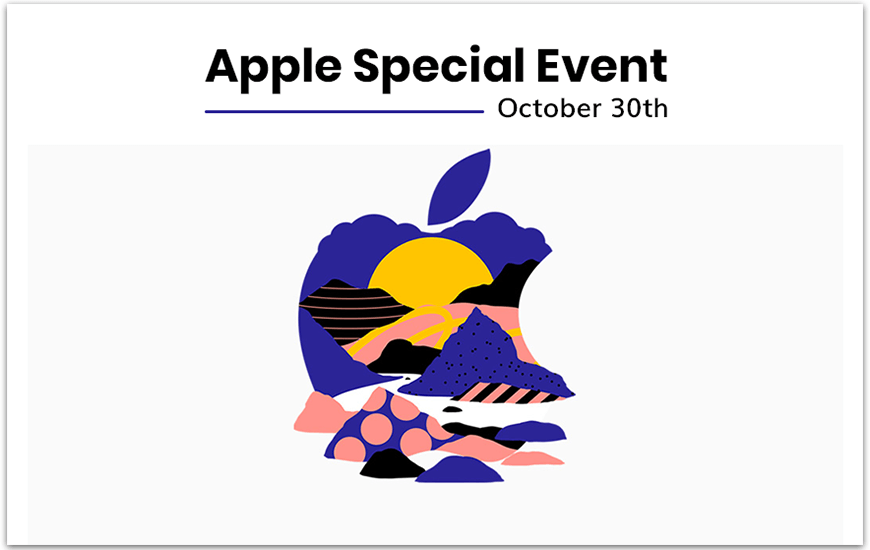 The announcement of the Apple event on October 30th has surprised us all, especially when, Apple has already celebrated the launch of its iPhone last month only. It's not usual that Apple goes for back to back events. So, for all of us, it's still a mystery what all Apple may bring up in the October 30th event.

The big announcement is confirmed by the event information being detailed on the Apple Events webpage. The event page is titled "Apple Special Event" followed by other details.

Interestingly, the invite sent by Apple includes the line "There’s more in the making," and a multi-colored Apple logo. Going by it, we can speculate that the October 30th event is a kind of extension of the September 12th event, which brought along iPhone XS and XS Max, Apple Watch Series 4, and iPhone XR.

How and When to Watch Apple October 2018 Event?

The event is slated to be held at Brooklyn Academy of Music, Howard Gilman Opera House, New York, US. The event’s live stream will kick-off at 10 AM EDT and 7.30 PM IST.

What to Expect: iPad Pro and Mac (maybe)

If the reports are to be believed, the Cupertino-based tech firm can unveil the latest iPad Pro models and updated models of the MacBook Pro laptops.

iPad Pro: Going by the rumors, the new iPad Pro is expected to sport slim bezels that will step up the screen to body ratio. Apart from this, the other significant additions can be Face ID and USB-C. Apple may launch two variants of iPad with 11- and 12.9-inch display sizes.

MacBook Air: Taking the last update of MacBook into consideration, the October 30th event looks to be an ideal platform to launch the upgraded version of MacBook Air. Similar to iPad Pro, the new Mac will embrace slimmer bezels and will be packed with the high-resolution Retina display. Who knows, Apple can astound us with a new Mac Mini.

Though it's early to expect a new version of the iOS 12, but we always crave for more. Also, the features like Group FaceTime and dual-SIM support, which was missing in iOS 12 can be compensated through iOS 12.1.

AirPower charger, new Mac Pro, a budget iPhone or a new tech toy to play with, Apple can surprise you on any given day. So, buckle up your seatbelts and watch out for the next Apple product event.

PREVIOUS How Is Artificial Intelligence Affecting Our Daily Life?

NEXT Top Money Saving Apps To Save Your Bucks In 2021

Snap rolled out yet another design but the multimedia messaging app failed to attract users this time also. Snapchat had really a great time back in the year 2016, after that the app’s popularity gradually declined with no improvements even now. It all started with Snap CEO Evan Spiegel ignore