Most Popular Categories And Types Of Apps

We have explained the major types of app category with examples. 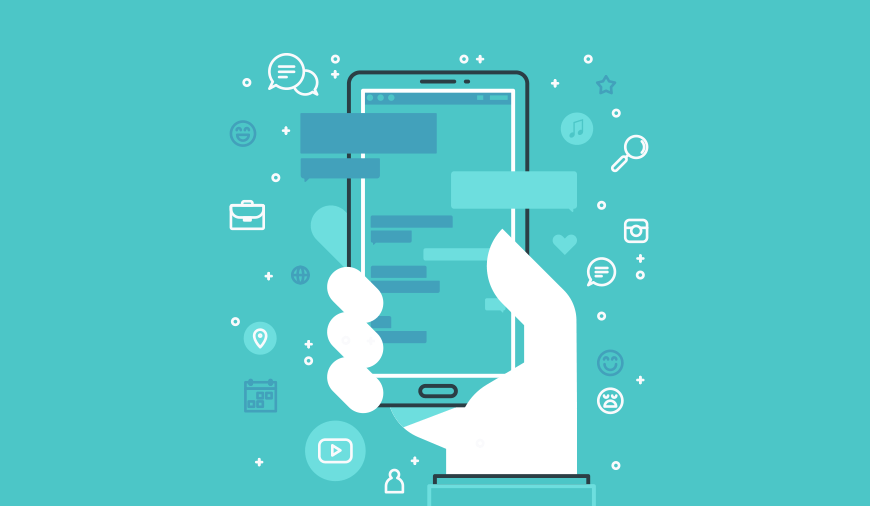 Today, in this world of smart devices, we have made APPS as an integral part of our living being. It doesn't matter if it is a mobile app or a web application or even an iPad app. And our dependence on these apps has now reached up to that extent where we are constantly connected to these applications in one way or another.

So, if these apps are playing such a prominent role, then it's only fair to get a much closer look in this advanced technology sector. Two of the leading app stores that are leading the market by consistently enhancing themselves in terms of performance and capabilities.

Let's start by breaking it down with the types of applications:

The native app can be described as a software program that is specifically build to be used on a particular device or platform due to which a native application can use the software and hardware which is specific to a device.

You can even know the in-depth reasons what separates the Native from Hybrid ahead. Below are some of the key advantages and disadvantages of the Native Applications:

What makes these hybrid types of apps so exciting is the fact that they consist of both the advantages as well as the disadvantages of the native and web apps.

The web application one of the main types of apps which has a mandatory requirement of device memory. These are the software apps that showcase similar behavior to native apps.

They are usually written in CSS, HTML5 or JavaScript and need a web browser to run. In many cases, this type also redirects a user to an URL and offer the option to 'Install' by merely marking their web page as a bookmark on the web browser.

Because all the user's data is saved on the server, the user can access their information via the internet. But in the case of a poor internet connection, the user experience is not so smooth and pleasant.

Here are some of the common factors, now let's see how all of these different types of apps perform when compared to one another: 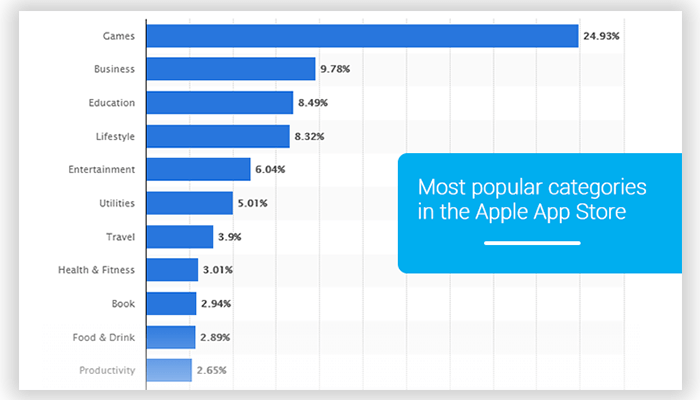 The category of gaming applications is the most popular category with a whopping 24.43% share in the app stores. It isn't exactly a big surprise because a majority of the audience is now into gaming more than ever; this includes both and girls.

Many experts have even stated that the average time spent on gaming activities have doubled in the past year or two. The gaming evolution is not focused on any one type of genre; the user now has a variety of games to choose from racing to the cooking games. That's the main reason why people of all age are attracted to the gaming types of apps nowadays.

Tasks like sending emails, buying a product from an online store, or even paying your essential bills, all you need to do is name it, and it will be done with the apps that fall in the business category.

Example: Evernote and Expensify are the top mobile apps used by Millennial CEOs.

The educational applications fall in the third place as a popular category of apps; this is because in the past five years the scope of online education has evolved a lot. The reason that the share of this category holds is just 8.82% is that many of these types of apps provide education up to some extent to its users, but still they are not included in the respective app categories.

With these education apps, the possibilities for students are now endless as they can now get access to a vast knowledge by sitting in the comfort of their home. Another thing that is impressive about this category in that it also features educational apps for kids as well.

Examples: Disney Control Central and Pixie are the best education apps for kids.

I was in an impression that the Lifestyle category will be ranking in the top three popular app categories and I am pretty sure many other people also think the same. As lifestyle is known to be the most extensive category in both of the app stores by covering almost every human interest and other activities.

The applications based on the personal lifestyle of the user like helping them in losing weight or assisting a user with a virtual fitting room are some concepts that are seen in this category.

Example: SleepBot and GoalsonTrack are great mobile apps to monitor your lifestyle.

Now, comes the category which is the most interesting that is the category of entertainment applications. Activities like live streaming, online chatting, watching videos online, social media platforms, looking up for events are the ones that come under the entertainment category.

These types of apps were created for the sole purpose of providing entertainment to its users and for also earning revenue from it.

Example: YouTube and Titans of Space are two of the best VR apps for entertainment.

That’s it for this article and if your thirst for gaining more information regarding the most popular mobile and web apps is still present then go ahead and check out our ‘News’ section.

Note
Don’t you ever feel like knowing which mobile app is trending or what application category is the most popular one in app stores like Google Play Store and Apple App Store. Well, this article is here to provide you with the right information and that too with examples of top app categories. For more information on the app category or particular mobile, we suggest checking out our app review section.
Written By
Vikram Content Manager

PREVIOUS Importance Of Adding Geolocation To Your Mobile Application

NEXT Which One To Choose: Mobile App Vs Mobile Website?

The book reading is one of the best hobbies anyone can embrace. After all, books can help you with a plethora of knowledge and understanding. The traditional printed books are rapidly being replaced by the e-books reader apps and why not, there are a number of reasons to pick an e-book instead of a

The 13 Best SNES Games You Should Know About

With the introduction of next-generation technology, the gaming industry has evolved exponentially. I still remember to play Max Payne on my PC with very dull graphics and not much of exciting interface.But, now the scenario is changed whether its PC or PlayStation the gaming experience is more

Have you ever noticed that various hidden process always run on your device when you use your Android application?These processes may prove to be hazardous to the health of your smartphone, and that is why it is essential to have apps that could keep your system clean enough. Cleaner apps take c