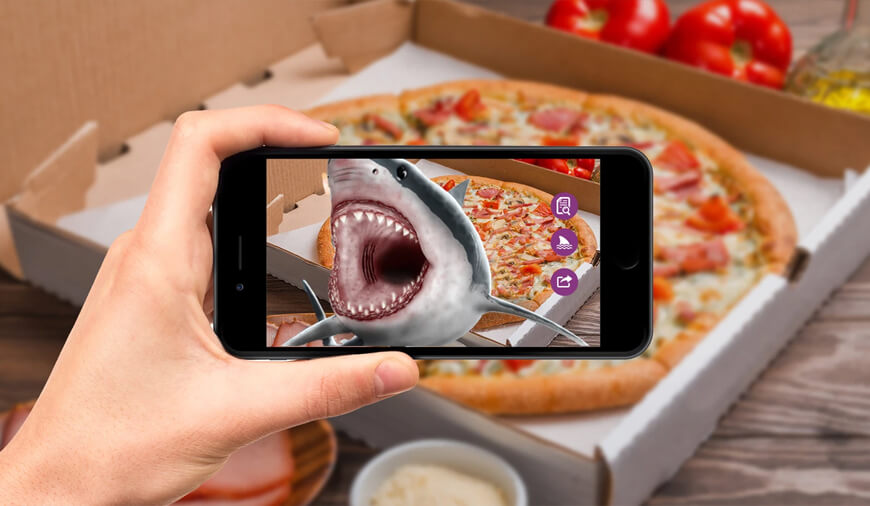 Snapchat, the social media platform that has been stumbling for a couple of years against its top-notch rival Instagram may have found something profitable. The company has continued working on its AR feature to allure more users and marketers. The recent activity is the Snapchat and Domino’s joined campaign that was carried out on 28th July in the US. During the campaign Snapchat allowed the users to order Domino’s pizza using the AR shopping feature of the app. With this, the Snapchat users were able to place their Domino’s order in seconds without leaving the app.

In order to manage this campaign, Snapchat introduced branded lens for Domino’s in the app. The lens work through both the front and rear cameras on your smartphone. Once you open the lens, you can see a virtual pair of aviator sunglasses on you reflecting pizza image. On flipping the camera, you will see a Domino’s box containing the pepperoni pizza, and by simply tapping the button on the screen you can request your order. This means you can place the order for your favorite pizza while browsing through the app.

Snapchat launched the AR feature back in April backing up by the big brands like Adidas, Koty, King (gaming company) and ETX entertainment. Now, the recent Domino’s campaign proves that the app’s AR shopping feature is working for the company by attracting other brands. The Domino’s campaign was managed by the ad agency named ‘Kabaq’ that turned the pizza images into AR feature for Snapchat. The whole new AR button inside the app enables the users to access shopping websites or to place orders via dedicated lenses directly and it is working out for the advertisers.

With its AR feature for shopping actions, Snapchat is in the pursuit of proving that the AR technology could be more than gaming or funny lenses. Moreover, to some extent, the company has already shown that by implementing the technology with broader marketing strategy. Snapchat introduced AR ads option for the advertisers back in December with free ad credits to compete with Instagram that offers vertical ad videos on the platform to the brands.

Along with this, Snapchat also shares that more than 70 million users interact with AR feature for almost three minutes every day. The company’s sale team makes the purchased AR lens to appear at the top of the section for the users. The social media app charges $500,000 for the AR ads from the brands or advertisers that reaches to 15 to 20 million users and generate 40 to 60 million impressions for them.

The increasing popularity of AR technology and the Snap’s all new marketing strategy may revive its business against the other social media platforms in the coming time.

PREVIOUS Augmented Reality in Education: A Way to Future

NEXT Mobile And In-App Advertising Trends: Here Is what's Changing in 2020

Uber Signs a With Deal With Volvo for 24,000 Self-Driving Cars

Uber, the ride-hailing giant has taken a huge step to ensure that we are not far away from seeing driverless cars on the roads. According to the latest news of Uber, the company has signed a deal to buy 24,000 autonomous vehicles from Volvo for its self-driving cars in the coming time.The deal w