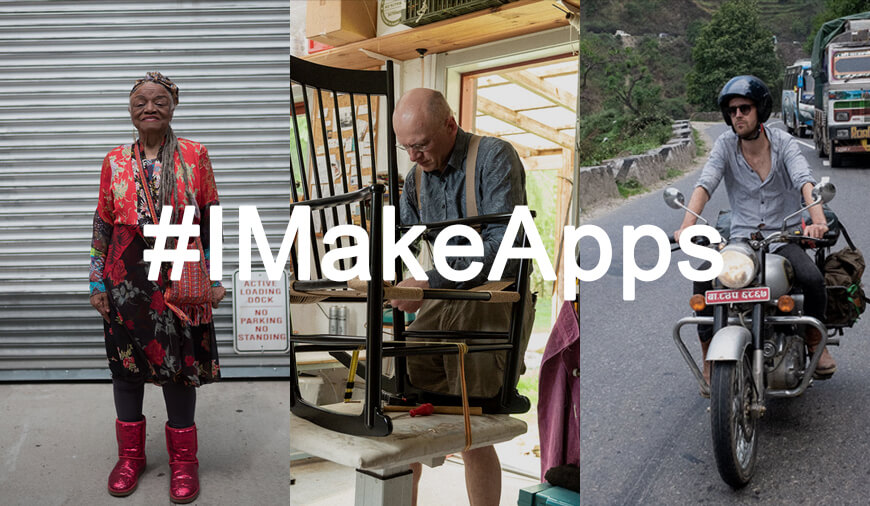 They say, “The more you praise and celebrate your life, the more there is in life to celebrate,” seems the fitting idea behind Google’s new #IMakeApps campaign. It’s the right time for all the developers, the designers, those who conceive the app idea or the ones who actually advertise the same, those who have been enriching the Android community in every possible way, or those who swear by Android apps burning midnight oil to code their apps, the ones who honour their affair with Android or those who have already committed their lives to this amazing short robot having a humanly appearance cladded in all green to share their ideas behind the apps.

The #IMakeApps campaign is asking Android professionals to feature their passion other than coding, something that they do when they are not glued to their systems.

The candidates would need to meet up the criteria that Google states as:

Talking more on the #IMakeApps campaign the Director of Developer Marketing, Platforms and Ecosystems at Google, Patricia Correa, quoted, “We are humbled by the accomplishments of our app makers and how they inspire and innovate on our platforms. With this campaign, we would like to celebrate them not just for their work but mainly for who they are.”

Google’s endeavor to celebrate the awesomeness of Android professionals through #IMakeApps is sure the pat on every programmer’s back. To accolade these app designers more the selected videos will be featured through Android’s official account on a series of social media platforms including Google+, Instagram, Twitter, YouTube, and Facebook.

NEXT Top Merits of Blockchain in Manufacturing Industry

Google Adds Auto-Delete Controls For Your Web And App Activity

Google is everywhere. It usually keeps a record of everything you search and everywhere you go. Although Google gives us the functionality of deleting the search history, but it is a heck of a task to delete the web and app activity manually. But not anymore!Recently Google announced th

LinkedIn just like any other social media platform deals with a massive amount of data. But, this huge database exactly caused it a problem, when the career website and professional network decided to attempt a redesigning the LinkedIn app for its social media platform. The main problem was to evolv