Evernote vs Google Keep: Clash Of The Top Productivity Apps

Just recently, Google Keep has been renamed as Keep Notes 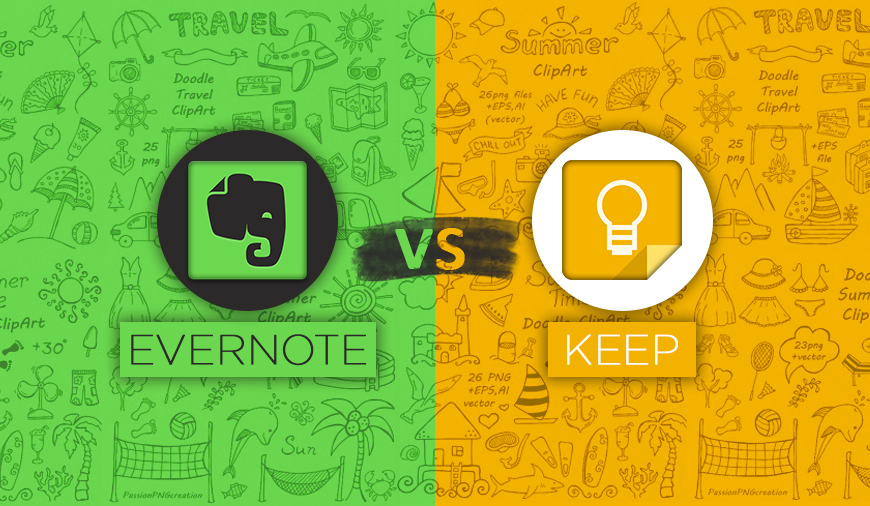 Nowadays, mobile and web apps are referred to as the backbone of any device like smartphones, tablets, desktops etc. And without apps, we may find ourselves back in the stone age. From favorite shooting games to cab-booking apps and from food delivery apps to basic reminder apps, there are a number of apps available at your disposal.

If we focus on day-to-day usage, apps designed for note-taking, organizing, task listing, and archiving are one of the most sorted after applications. On this note, I have picked Google Keep and Evernote to know which one has absolute sway over the others.

Interestingly, both of these apps have similar functionalities. Like storing texts, cloud-based syncing, browser extensions and the ability to set reminders, these apps do it all. Still, there needs to be a winner between the two. Therefore, I have put down all the aspects of Google Keep and Evernote apps to dig more about them.

Google Keep now known as Keep Notes has been one of the most popular note-taking applications for Android smartphones. As a digitalized scratchpad, Google Keep offers users the facility to collect notes as well as images, storing voice recordings, writing down to-do lists, and organizing notes. The user interface of this app is simple yet streamlined to deliver a great user experience.

Below are some of the main specifications of the Google Keep app:

Here are the advantages and disadvantages of using Google Keep as a task managing application: 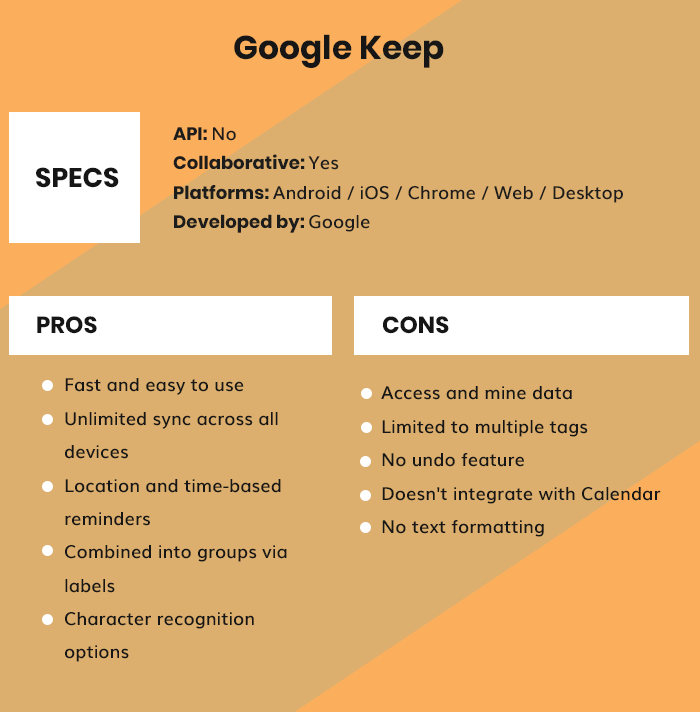 Google Keep is one of those handy apps that you tend to use now and then. Keep it on your homepage because every moment needs to be tracked and who knows when you have to pin down details.

Google Keep is not limited to just reminders and notes; you can snap a photo, record your voice, or start a new list.

Sometimes, it may be a mess to find some notes, but not with Google Keep.

The Google Keep "Lists" feature is one that lets it take an edge over other such apps like Evernote and Apple Notes. Once you check something, it goes to the bottom of the list. If you want to add something more to it, simply check it undone, the item will be again listed in the action items. Furthermore, you can drag and drop to manage the list.

Being smart is another feature that Google Keep boasts. When you start typing, the app will suggest the related item, and if the typed item already exists in the list, it will be visible on the top. Else, if the item is missing, it will be added automatically.

You can quickly capture what’s on your mind and get a reminder later in the right place or time. Google Keep also lets you automatically transcribe a voice memo on the go.

Furthermore, you can capture a thought or list for yourself, and share it with friends and family.

Evernote is a cross-platform application that is supported by Microsoft Windows, iOS, macOS and Android. With this app, the user can perform operations including listing tasks, organizing notes, archiving, etc. Evernote also allows creating notes in various formats like voice memo, web page excerpts, text format and many more.

Below are some of the main specifications of the Evernote application:

Here are the advantages and disadvantages of using Evernote as a note-taking application: 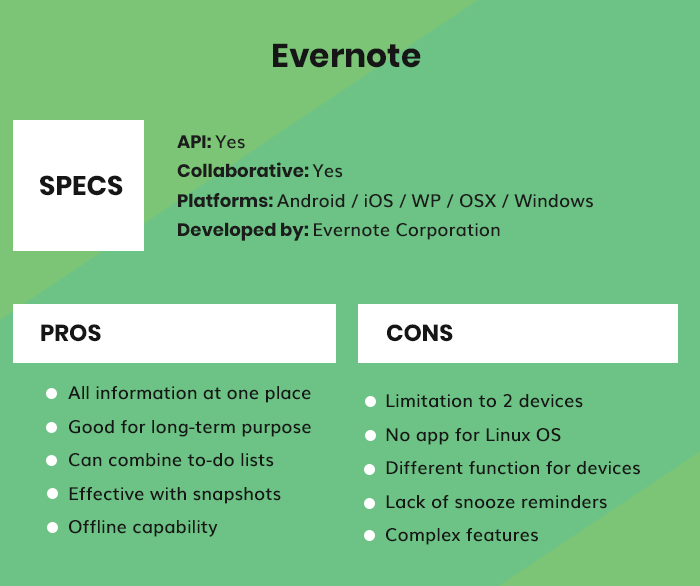 Evernote is a feature-rich app that lets you customize everything. From fonts to toolbar buttons, you can grip anything.

The app can be somewhat tricky for a new user, as the app contains a lot of features and juggling among them can be a mishmash.

The best part of Evernote is that you can virtually attach any file to the app that exists on the device. Be it notes or photos, pin down everything. Moreover, Evernote can be backed up on the cloud, and you can access the content from anywhere you like.

The only limitation this app brings is the amount of content you can upload per month. It will directly depend upon the subscription level that is available to you. Storage is not an issue with Evernote, and users can store large amounts of stuff over here. 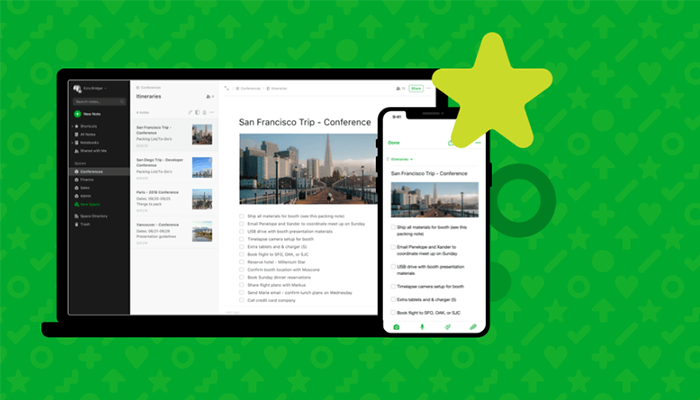 In terms of locating anything on the map, Evernote pushes aside the Google Keep. If there is text within images, the app can easily take it on.

Even after having the same core functionality, each app has its own conveniences. Google keeps remains incomparable when it comes to making lists, remembering events, or recalling any number. Whereas Evernote excels in keeping a tab on personal documents.

Now, if you want to choose a note-taking application, the first thing you need to do is set your priorities straight. Although both Google Keep and Evernote are excellent apps that offer remarkable features, picking any one of them won’t disappoint you either.

But my suggestion would be to give both apps a try before reaching the final conclusion. Also trying out both the apps to test out their features is a smart option, especially when you are looking for long-term use.

Evernote and Google Keep are great examples of efficient productivity tools, so make sure to check out the other best productivity apps to help you out in 2019.

In case you want to stay up-to-date with trending topics related to Mobile App Industry, then all you need to do is click on that 'Subscribe' button.

PREVIOUS Instagram Is Persistently Adding More Features To Its Platform

NEXT Artificial Intelligence Trends Everyone Should Be Watching In 2021