Express yourself a lot more. 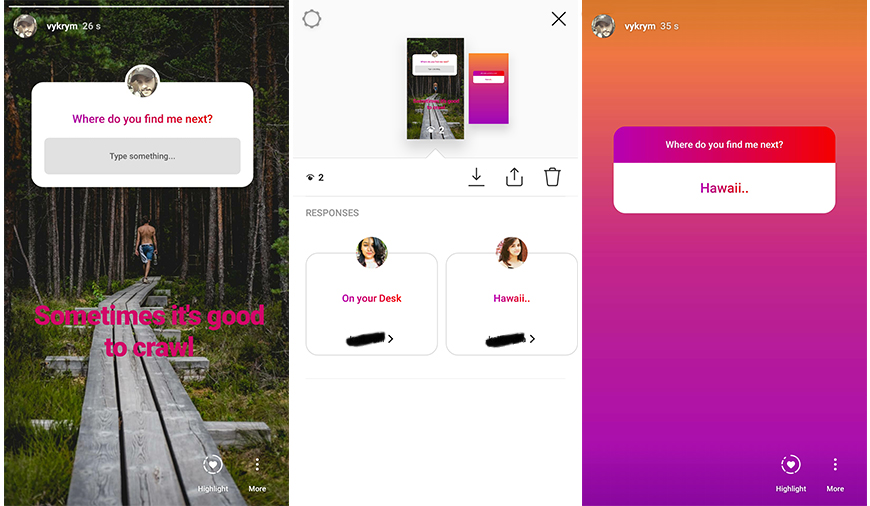 To add more punch to it, Instagram added the Questions Sticker, which when used, lets the account followers reply to your question on the same post. It’s not the same as the polling feature.

Instagram says it’s “a way to start conversations during moments when you don’t necessarily have a photo or video to share.”

The Instagram users can find the new feature in the sticker drawer. Once you open the Stories camera, take a photo or video, after that you can find the sticker icon in the upper right-hand corner. Pick the Questions Sticker and type your question. On publishing the post with Questions Sticker, your followers will be able to answer the question in three lines. This way, people will be able to convey more than just yes or no.

However, you will be able to see the replies to the question in the list of people who have viewed your story. Furthermore, you can also share any of the responses that you receive from your friends. Doing this will only display the reply one has made, and not his identity or profile picture.

The Questions Sticker feature is expected to bring more engagement among Instagram users and will further push anonymous users who hardly involve in any activity. Instagram rolled the new feature for both the Android and as well as, the iOS users.

Last month, Instagram reported having 400 million daily active users on its Stories feature, which was adopted from the Snapchat. Interestingly, till last month, Snapchat was sitting at just half of the user base on the Stories feature than what Instagram was able to acquire. It boosted the marketing strategies of Instagram to innovate and keep infusing some of the other feature in the Stories section.

Uber, the ride-hailing giant is putting all its effort into the “180 days of change” campaign. The company keeps on revealing a bunch of new features to its app for securing faith and trust of the drivers into its service. Now, the company added new features, again to provide better thin

Android Messages Update Comes With Duo Calling And Other Upgrades

Google is updating the Android Messages and integrating more useful options to it. The upgrade from V 2.5 to v 2.7 is taking things slightly higher than what we expected from the Messaging app. With the upgrade, the Android Messages will get a Duo calling option, smaller APK, message indicator and R

Yahoo is struggling to make it big in the market after Yahoo messenger left with nothing. Now, the tech giant is counting on its other services to enlarge the user database. Recently the company announced that it would be releasing the two new version of Yahoo mail for the mobile web. This means the