Google either face a penalty or make changes to Android. 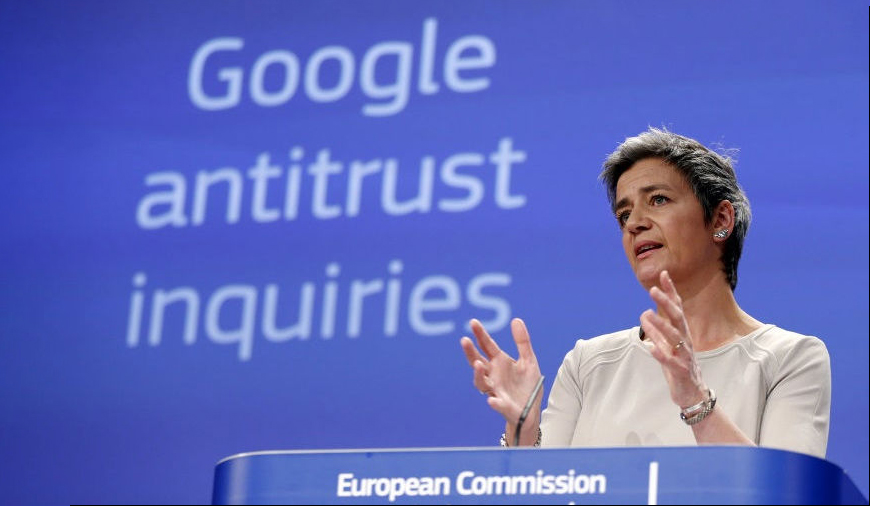 Google may have to face a record penalty this month from European regulators for compelling its web-browsing and searching tools on Android-equipped smartphones and other device makers, possibly resulting in a key change to world’s greatest deployed mobile operating system.

As per the sources, the penalty from Margrethe Vestager, the European Union’s competition chief, may include a fine of billions of dollars. The reason behind E.U’s imminent verdict is Google’s policies that pressurize tablet and smartphone manufacturers to pre-install Google’s Android operating system.

In E.U.’s eyes, device inventors like Samsung and HTC face an anti-competitive choice. Implying, they have to set Google Search (as default) and offer Google’s Chrome browser to get a dignified place in the Play Store. Moreover, they could not avail of services from Google’s competitors provided by third-party developers.

If the reports are to be believed, Vestager upcoming ruling could ban Google from such app-installing deals with device creators. Alternatively, E.U. could even force the company to offer customers a simpler way to switch services, such as search engines, on their tablets or phones.

The consequences for Google could prove huge. Packaging tools, such as search, and adding them to Android devices, provide the organization with a method to have data about users and display them more ads. Removing that pathway for insights and profits could prompt Google to think the complete ecosystem for Android once again.

Jakob Kucharczyk, the vice president for competition and E.U. regulatory policy for the Computer & Communications Industry Association, a trade group that represents Google, stated, “Nobody is forced to take Google’s apps, but if you want to have certain apps you have to have the whole suite...”

The E.U. restrictions on Google for Android may ignite political pressure on U.S. antitrust administers, including the Federal Trade Commission. The list of accusations, first declared in 2016, including the problem with Google techniques to manage Android.

Google does it to ensure the user’s constant experience with Android, regardless of change devices. Nevertheless, Vestager considers it as a prevention for customers to buy smart mobile devices, potentially superior editions of Android OS.

Eventually, the E.U.’s verdict may not be the last word on the matter. Google could appeal further, meanwhile, it would need to change its business practices to avoid penalties. Vestager’s announcement is expected before E.U.’s government depart for summer break

NEXT Apple Adds Protections Against USB Devices In the iOS 11.4.1 Update

Apple Podcast Analytics Service Is Here, But In Beta Version

Today, Apple announced that it is launching the beta version of podcast analytics service for the show creators. The iPhone maker first talked about the service in WWDC 2017 and promised to launch it soon. The analytical tool shows the metrics and data that are required by the podcasters for lo

Bambino is an app which helps parents to find the trustworthy babysitters recommended by friends or neighbors. This app is designed to help parents at the last minute when parents have to leave their kids at home to attend an urgent meeting or work requirement. It helps parents in finding nearby bab