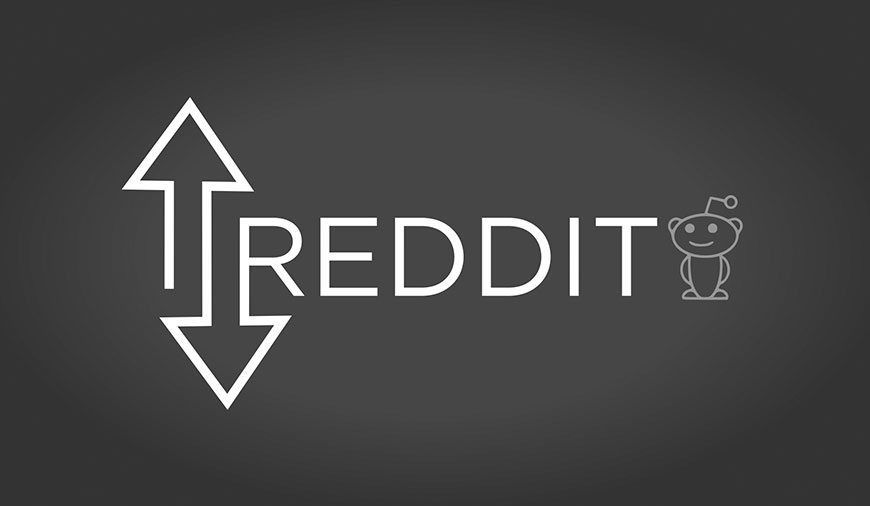 Reddit is known as the front page of the internet, and no one could deny the fact. The Reddit community knows it for sure, which is pretty hard to explain to someone who doesn't have any information about this discussion website.

Reddit is excellent when it comes to carrying out discussion on any of the topics. Be it about a social media news that is making the rounds or about a dose of entertainment that has made global recognition; the readers make the things worth happenings.

Well, the website is, of course, an innovative offering for users to submit their subreddits, but when we talk about the official Reddit app, there was nothing before 2016. It was only this year that Reddit came with its original application.

Well, Reddit’s app is relatively new, and besides the Reddit’s official app, there are many Reddit clients that we are going to talk about through this post. I have included the list of the best Android apps that help you add subreddits to any of the hot topics. Here comes the list

BaconReader has a status of being one of the widely-known, most used and the most popular apps for the users that has everything for them. Talking about the design, it has a Material Design interface that fits perfectly with the aesthetics of the application. 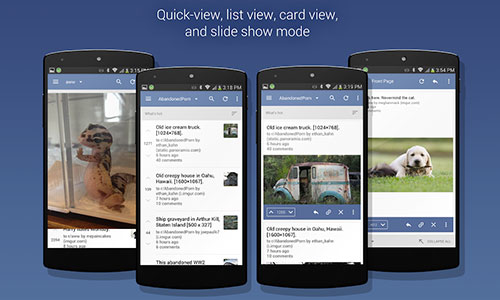 Well, talking about the background themes, they are exceptional too in the offering. The threads are color-coded which makes it even easier to comments with the use of moderator tools that are again exceptional in the functionality, there is a decent search option for the users and advanced filtering too that adds to the overall app feature.

Boost for Reddit is more famous for getting customization in every element you would need. If compared to other apps in a similar category, most of the apps have two or three views, but Boost has eight variants including three Card view variants, two list views, two image-centric views, and a Swipe view.

The last offering suits to those perfectly well who swipe Reddit the way they swipe Tinder. Browsing through comments, this app gets even more exciting as it allows users to use a collapse all button that helps them collapse threads to the parent comment. Another exceptional offering for the users.

Now for Reddit is again an app that needs mention in this list for its simplicity. It is also known for being an easier app on the list. The app’s features are basic but exceptional at the same time. The app offers support to several file types including Imgur support, and support for Reddit Gold features. 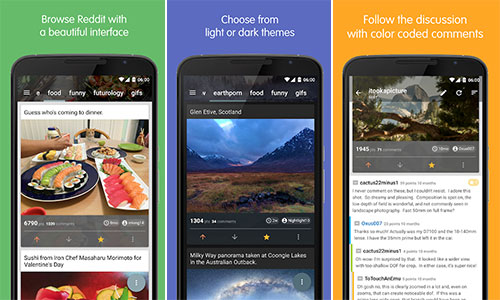 The app features modern design too. The design helps users swipe to change the subreddits for quick browsing. There is also an option for browsing through subreddits as per the need. The app is available with a free version, but the pro version costs users $3.99 (as an in-app purchase).

The Reddit client is known for a different reason. It features a UI that is funky. The app has a list of exceptional features too. It helps users be the pro at mega threads and most especially to AMAs as a versed user would do.

The full-size Card view is not enabled on this app, and this makes the Reddit client different from others owing to all these features. Well, this change will hit the app soon, but the app is already popular among the users just like anything.

There are big beautiful cards for adding aesthetics to the app. The app helps to flip between an article and the comments swiping.

As mentioned earlier, Reddit’s official application is new as compared to other apps featured here on this list. The official app was launched a few years back, and that is why it is not as popular as the other offerings in this list.

However, it is one of the must-have apps on the list owing to its functionality that the official app provides to the users. 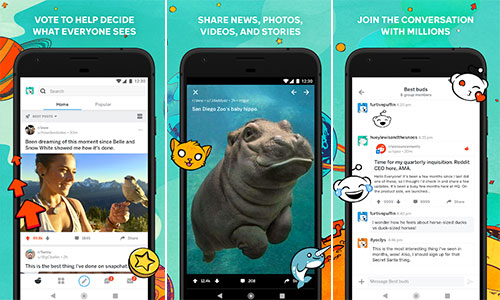 The basic features are all the same and work appropriately for the users. The app gives the fundamental options, and because of a similar reason, it is said to be designed for the new users and not for the pros. It needs to garner an extensive list of features to be more prominent in the Reddit Android client list.

The best thing about the Reddit Offline app is it has one of the offerings for the users that comes completely free. Probably this is the reason for the popularity of the application among the users. The very first step of using the app includes downloading the large section of the application to use it later offline.

The users can access the offline mode during airplane flights, or in between subway rides, or in areas where users don’t have a good connection for the internet. There is an option to schedule the app to download content at specific times; the download completes with the images and comments too.

Slide for Reddit is different for all the right reasons. Some users say it a diamond in the rough. The customizable options are exceptional, and that is why the application has a fame of its own. 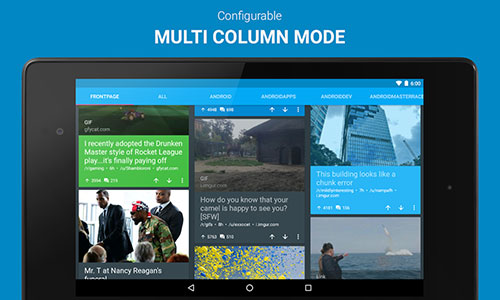 The features are all the basic that any such app has for the users, but one thing that makes it exceptional from an extent list of Reddit clients is the Synccit integration, Shadowbox support, and live thread support.

All these features are exceptional for the users. There is a pro version available for the users, but going for the same would require users to get the ad-block in the built-in browser.

Worth mentioning the app has night themed design to showcase AMOLED theme. The Reddit additionally supports Android Nougat, which is another great news for the Nougat users.

Here comes the end of the write-up having the best Reddit apps for Android. All of these applications are known for some special offerings that they offer to the users. All of these Reddit clients have a special feature that makes them one prominent in the list of other apps listed here.

In case, you are a Reddit user, do let us know about your choice. In case, you are not on Reddit yet, do visit this amazing website to know all about the happenings taking place across the globe.

PREVIOUS Keep An Eye On Info That WhatsApp Knows About You

NEXT What is App Store Optimization and How it Boost App Ranking in 2021?

Imagine coming home after a long Friday just to see an empty fridge. “Been there, done that”. So, after learning from such a nightmarish experience, we made a list of apps that can help you in getting your beer anytime, and anywhere!  Be it parties, sad nights, solo birthda

For some people, music is meditation, while to others music is an expression. It doesn't matter how you are feeling, music is a companion suitable for any type of mood. And now, while our smartphones have become our main source of entertainment, good music apps have boosted their coverage in the

These days, having a web presence is no longer sufficient as it is very important for a business owner to connect with the on-the-go customers and employees. Thus, mobile apps are crucial for the success of the business. Apart from connecting with customers, smartphone apps enable you to organize yo

Retaining top-class talent is everyone's strategy but it takes more than generous salary structures and thorough benefit-packages to attract and retain top talent. Even professionals aren’t just motivated by money; most professionals also desire other feats, such as positive feedback and r