WWDC going to be prominent for Siri. 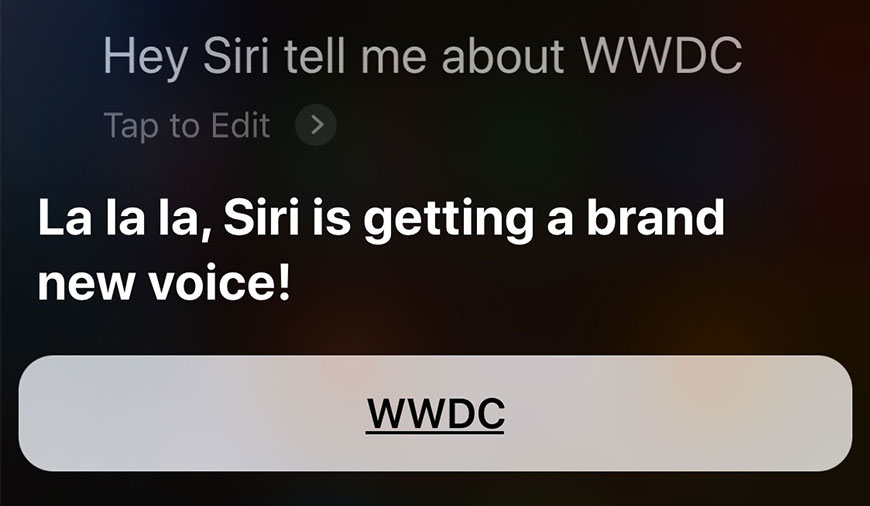 For every Apple user, Siri is a blessing. Her voice is so similar that they could not think of passing their days without hearing the same. Meanwhile, I am not here to talk about Siri’s voice but to give you a brand new update that WWDC may have a brand new gift for the voice assistant that may come by revamping her voice at the event. The virtual assistant is not only likely to get a brand new voice but also smart speakers. In case, you are an iPad or iPhone user, you could ask the voice assistant about the same.

Is It Apple’s Strategy To Create Buzz On WWDC?

Siri is, of course, getting a brand new voice and the company seems to cash on this opportunity too. Thus, to generate buzz around WWDC, the company is using its voice assistant. In case, you have compatible devices, you could ask Siri about the news and about the event too that she will respond with;

La la la, Siri is getting a brand new voice.

Siri may have revealed plans for new HomePod at WWDC. https://t.co/qWMJDzcoxr

More To Look Into

The voice assistant could also get a new home in a brand new home pod that will also be revealed at the event. Siri is limited to iPhones and iPads while Google Assistant and Amazon Alexa has much more to cover than the voice assistant currently does. Well, this rollout may offer more power to it. Google Assistant and Alexa have recently received some new voices and it may be the effect of the same that Siri is now getting the new voice too.

As far as Siri’s new home is concerned, Apple may reveal a $199.99 Beats-branded HomePod. What Apple is up to can only be revealed once the WWDC kicks in. As far as the new voices are concerned, it is only going to make the offerings prominent. The change may also add more users to the voice assistant as whatever Apple does get popular among the users.

A glance at previous promise for Siri at WWDC

2016 - Apple announced initiative to add Siri’s voice to Uber and Circle. As  promised the commitment was delivered by the technological giant

2017 - The HomePod became Apple’s answer to Amazon Echo and Google home connected speakers. The offering was introduced by Apple at WWDC

Stay tuned to MobileAppDaily for all the latest happenings at WWDC (June 4).

Do You know How Much Google Pays For Its Pre-installed Apps on Your Android devices?

Recently we have witnessed the incidents that reveal how most of the apps and companies are putting users privacy at stake. To minimize this risk and taking the security aspects of the apps to own hands smartphone platforms are working vigorously. Apple has just revealed one more security step which

Tim Cook: Technology Does Not Exist For Quality AR Products

Tim Cook, Apple CEO, the man leading the most valuable company on the planet share his views and vision about AR technology. In a personal interview with The Independent, Tim Cook said that according to him the current market isn't ready yet for the VR glasses and wearables. Further adding he al