Is Apple lacking behind in Tablet Sales? 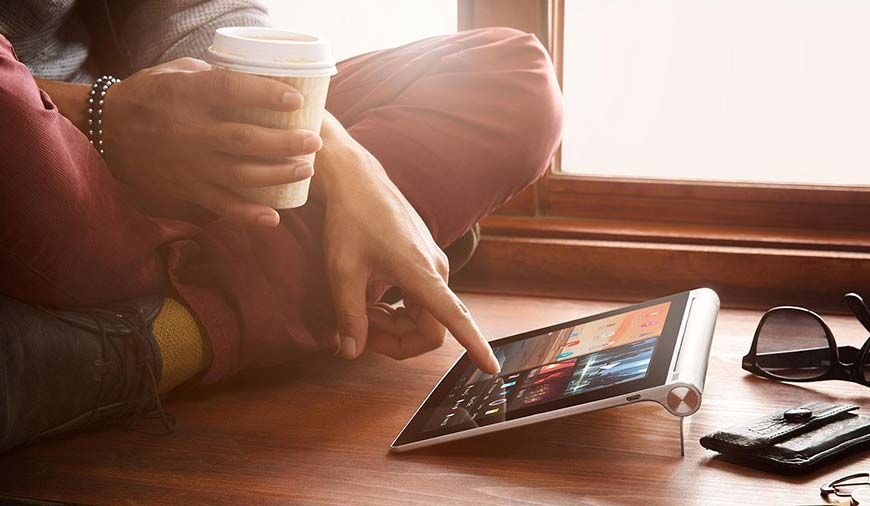 The global tablet market is rapidly shrinking. Tablet sales have been declining since 2012, according to news reports. Between 2012 and 2017, tablet sales have steadily declined continuously for ten quarters.

Is it the Doom for Tablets?

The decline in sales of tablets is most felt by well-known tablet manufacturers and assemblers like Foxconn and Pegatron. These companies were churning out new tablet products vigorously about five years ago. By the end of 2017, the companies were least enthusiastic about tablets, according to a researcher with Market Intelligence & Consulting Institute.

Overall, tablet shipments in 2017 were down 6.5 percent from 2016, according to IDC. The manufacturing data indicates a massive fall as well. In 2012, Taiwanese tablet makers were shipping 35 million units. In just about a year, by 2013, the manufacturing statistics dropped by a dramatic 10 million.

Analysts have already decried a slow start to global tablet sales in 2018. Is this an early sign of doom for the tablet, once considered a promising gadget that could replace the desktop computer? Are smartphones finally replacing tablets?

Actually, the numbers are a bit more complicated in reality. Tablets sales are on the decline overall, but not for all tablets, it seems.

Which Products are the Most Affected?

The drop in the sale of tablets is largely limited to products known as “slate tablets.” These are standard or traditional tablets like the original Apple iPad. Slate tablets have touch screens bigger than the standard smartphone but have no accompanying keyboard like in a computer. The sales numbers are quite different for so-called detachable tablets, which are devices that are sold with a keyboard as an accessory.

Detachable tablets like the Microsoft Surface or the latest iPad Pro are actually growing in sales. At the end of 2017, the sales of these high-end tablets were going in the opposite of the worldwide slate tablet trends. In fact, consumers are buying detachable tablets even if these devices tend to be pricier than slate tablets.

Some Brands Rule over Others

The global decline in the sale of tablets is not affecting one brand though: Apple. The iconic company has lead global tablet sales steadily in the past few years. The company’s iPad products are leading overall tablet sales. To put it in perspective, Apple tablets amount to a vast majority of worldwide tablet sales. All the non-Apple tablet brands only amount to less than 35 percent of the global market share. 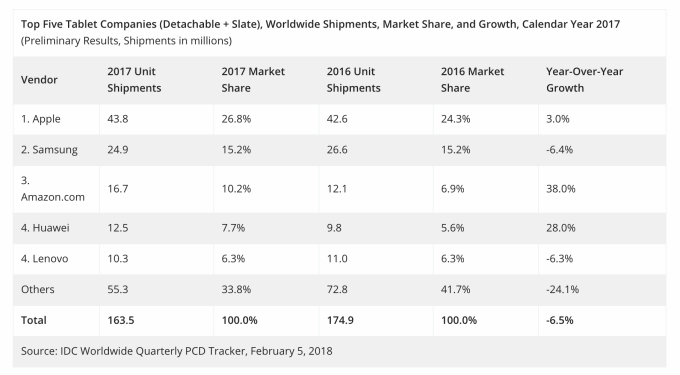 Not too far behind Apple in tablet sales is not another tech company, Amazon, the retail giant. Amazon’s budget-priced Fire and Kindle labels gave Apple products stiff competition during the holiday season in 2017. The brand’s tablets now include Alexa, the voice-operated AI equivalent to Apple’s Siri that is superbly popular among Amazon’s customers.

Familiar handheld device labels like Samsung, Huawei, and Lenovo have not been able to replicate the success of Apple or Amazon. Samsung, despite the company’s steady sales in smartphones, has been struggling to sell tablets. However, the brand’s upgraded detachment tablet portfolio is increasing in sales.

Lenovo and Huawei, which continue to sell slate tablets, are not doing so well in the sector. Huawei remains a top five tablet seller thanks to cellular connected slate tablets. Lenovo is relying on its PC business to generate revenue, mostly because the profits from its slate tablet line are abysmal.

Why are Overall Tablet Sales Declining?

Back in 2012, analysts spelled near doom for PCs and forecasted the rise of tablets as the new computer. Barely five years passed before tablet sales began to fall. Consumers, too, were once excited about slate tablets. What changed?

A Gartner report suggests the rise of bigger smartphones is to blame. Modern smartphones can be as nearly as big as 7-inch tablets. Now there are “phablets,” a whole new genre of smartphones that blend the functionality of a phone with the size and computing power of a tablet. Rather than carry a tablet and a smartphone, consumers just prefer to use a smartphone with a large screen. The phablets offer all the conveniences of a slate tablet plus a cellular connection.

Slate tablets that are still selling, such as Huawei, come with cellular connectivity via a SIM card. Smartphones, in general, are catching up to the power of tablets. Larger smartphones, such as Samsung’s Galaxy Note series, have additional attachments like keyboards and cameras. As smartphones become more like tablets, the latter will simply lose ground among consumers.

The exception, detachable tablets, continue to dominate the market thanks to one key factor: productivity. Apple’s massively popular iPads are being sold as machines that boost productivity. The latest iPad can match the power of a small laptop. Users of iPads can conveniently carry the gadget for both work and entertainment purposes. While even the most powerful iPad cannot yet fully replace a desktop computer, these handheld devices are increasingly offering productivity solutions that customers desire.

The death of the tablet may not be around the corner just yet. However, the future will certainly see a decline in slate tablets, and a rise of detachable tablets and phablets, which will eventually have to compete fiercely for market domination.