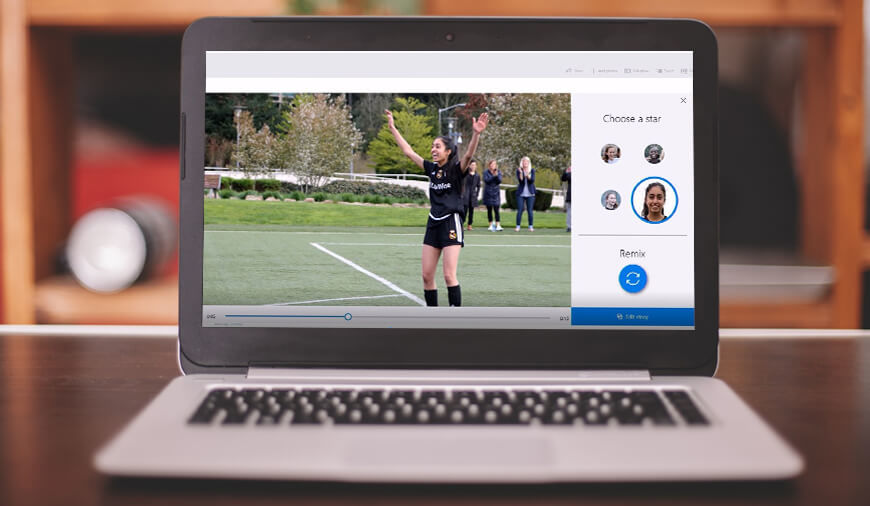 Microsoft Photos app in the Windows 10 has been through a significant evolution over the time. But it seems the company is not running out of ideas to make it more useful and creative. Now, the company has added another feature named ‘choose a star’, that creates a video focusing on a single person. The new functionality will help in creating an auto-generated video from the several images and other media content focusing on a specific person. The new ability is added to the Photos app in windows 10 creators update by the company.

The 'choose a star' functionality is the most interesting update that Photos app has received yet. As the name suggests the auto-generated video will have a particular person in the focus, chosen as the start in the end product. All the user just need to drop several videos and images and select a person with ‘choose a star’ option that the system identifies as the focusing point. You can add “remix” to the video until you find the suitable one that adds an alluring effect to your creation. The feature will identify the chosen person in all the given content and keep focusing on that person in the entire auto-generated movie.

Microsoft launched the ‘story remix’ feature for the Photos app in Windows last year in fall with the Windows 10 creators update. The option lets the users create videos with background music, attractive transitions, and other creative options. Now, with the addition of the ‘choose a star’  the company has taken the video making or editing to a whole new level. With the help of newly added feature, the users can create a film concentrating on a particular person. “With today’s update, you can take your filmmaking to the next level by selecting yourself or nominating someone to be the star in your automatically generated creation,” Microsoft wrote in the blog post. “Photos will then build a video around the person you choose, pulling in relevant photos and videos, zooming in on your star, and choosing an appropriate theme”.

The ‘Choose a star’ feature will help you in making a sports game highlight video featuring your kid as the star or you can make a birthday movie for anyone.

Google announced its AMP (Accelerated Mobile Pages) project back in 2015 to improve the browsing on mobile devices. Now, the company is taking the technology one step further with the launch of AMP story format. In order to upgrade the basic content articles, the company introduces story feature for

Facebook Had a Busy Day Due to The Solar Eclipse

Mother nature made the day for Facebook and beats the audience record acquired by super bowl ever. The 21st August solar eclipse was totally over the internet and people were talking about it since they came to know about the rare natural phenomenon. But, the social media giant Facebook garners the

“Work hard in silence and let your success make the noise.”Every app developer or app owner wants their app to get recognition and nothing could be better than the Apple Worldwide Developer Conference’s stage. At the ongoing annual event, Apple announced the winners of Apple De