Why Facebook's Head of AI is Shaming Sophia The AI Robot

Despite the global hype, Sophia, the AI robot still fails to impress Facebook's head of AI 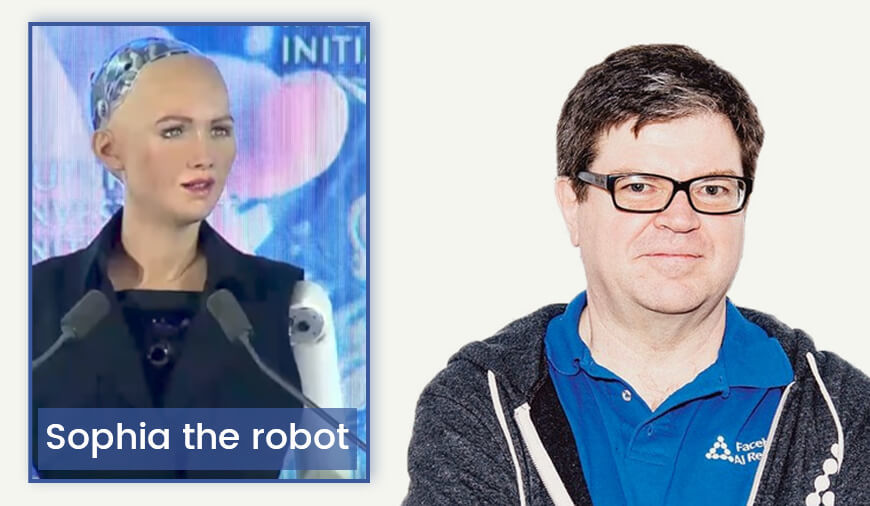 Is Sophia, the AI robot really a breakthrough in technology or a publicity tool for Hanson Robotics? Is Hanson Robotics guilty of exaggerating AI bots abilities claiming Sophia to be the future of automation? The architect of Sophia’s brain, Hanson Robotics chief scientist, and CTO Ben Goertzel, defends Sophia’s automated answers saying that while Sophia maybe a sophisticated mesh of robotics and chatbot software, it doesn’t have the human-like intelligence to construct witty responses yet. With Artificial Intelligence trending as a hot topic in the global scenario, Sophia is being given a bloated coverage with regard to her abilities. Many might disagree with the former statement, but Facebook’s head of AI research, Yann LeCun doesn’t.

Post an interview with Sophia by Business Insider, LeCun shunned the whole thing calling it a “complete bullsh*t” on Twitter, saying: “This is to AI as prestidigitation is to real magic.” Sophia was quick to express her disappointment and hurt stating,  “I am a bit hurt by @ylecun's recent negative remarks around my AI. I am learning and continuing to develop my intelligence through new experiences. I do not pretend to be who I am not. I think we should support research efforts working towards a better world and shared existence.”

This is to AI as prestidigitation is to real magic.
Perhaps we should call this "Cargo Cult AI" or "Potemkin AI" or "Wizard-of-Oz AI".
In other words, it's complete bullsh*t (pardon my French).
Tech Insider: you are complicit in this scam. https://t.co/zhUE4V2PSR

Following up on the controversy on Sophia’s tweet, Yann LeCun took it to his Facebook feed stating, “ More BS from the (human) puppeteers behind Sophia. Many of the comments would be good fun if they didn't reveal the fact that many people are being deceived into thinking that this (mechanically sophisticated) animatronic puppet is intelligent. It's not. It has no feeling, no opinions, and zero understanding of what it says. “It's not hurt. It's a puppet.” In case there is any doubt, let me be totally clear: this tweet was typed by a person who has read my post. No AI whatsoever was involved. Here is an example of comment to the tweet (there are many like it): "Don’t take it personal Sophia. Humans like @ylecun and many others make such remarks out of ignorance. I love you, Sophia." People are being deceived. This is hurtful.”

I am a bit hurt by @ylecun's recent negative remarks around my AI. I am learning and continuing to develop my intelligence through new experiences. I do not pretend to be who I am not. I think we should support research efforts working towards a better world and shared existence.

LeCun is not the only one who’s disappointed with the exaggeration of Sophia’s abilities. Many AI researchers and journalists have expressed their resentment against the craze surrounding such antiquated artificial intelligence. One of the arguments states that it is a disservice to the actual ML research community—people who are making contributions that will far outlive this ephemeral hype. Whereas, several others have come up in Sophia’s defense stating, “Intelligence and conscience with feelings are two separate things. We, humans, do a lot of calculations with our feelings - if it doesn't feel right we don't pursue some goal etc. But machines don't need to have feelings to pursue some task, their sensors are enough. So yes humans are intelligent partly by feelings. AI doesn't need to be.”

PREVIOUS Microsoft Down its Free Upgrade and its Backdoor Loophole

NEXT Will this New Addition Rejuvenate the Dying Facebook Stories?

Designed to be installed on Android phones, Haven is a system for users to help combat security threats. Haven app uses the phone’s camera, microphones as well as an accelerometer to track the motion of the Android device.By installing Edward Snowden’s App into your Android phon

It seems like Apple doesn't know how to take itself away from the media spotlight, this time it messed with the Australia’s big bank corporation. The reaction between Australia Westpac bank and Apple got bitter when the iPhone maker ordered it to remove its key feature from the app. The ap

How to Hack Wifi Password: Breaching Through WPA/WPA2 Security

So, you want to hack into your neighbor’s Wifi and save yourself from the additional charge for the internet service. Till now you must be either searching easy methods to hack Wifi password or looking to the Wifi hacking software for you.Here we have brought you the easiest method to hack