Google introduced the Files Go app in the beta version for the Android users back in November. On Wednesday, the app is coming out of the beta shell and available to all the users with full features. The app is launched by the company to help the users in managing files more efficiently and freeing up space. The Files Go can also use for high-speed data transfer with another device nearby. Google also announced some new features and more Android apps focusing on Indian Market alongside the launch of Android Go (Oreo Edition) for the devices with RAM between 512 to 1GB.

The search giant has launched the Files Go app with the aim to optimize the storage on low-end devices and help them to perform faster. The app lets the user transfer data across two Android devices without using the data connection at 125 Mbps. Talking about the prominent feature of the app, it uses the mobile vision technology of Google to manage the device storage. With the help of mobile vision, the app informed the user about the files that could be deleted like unused apps, duplicate files, unnecessary video and memes to clear up the storage. The app suggests the user delete these files and speed up their Android devices from time to time. 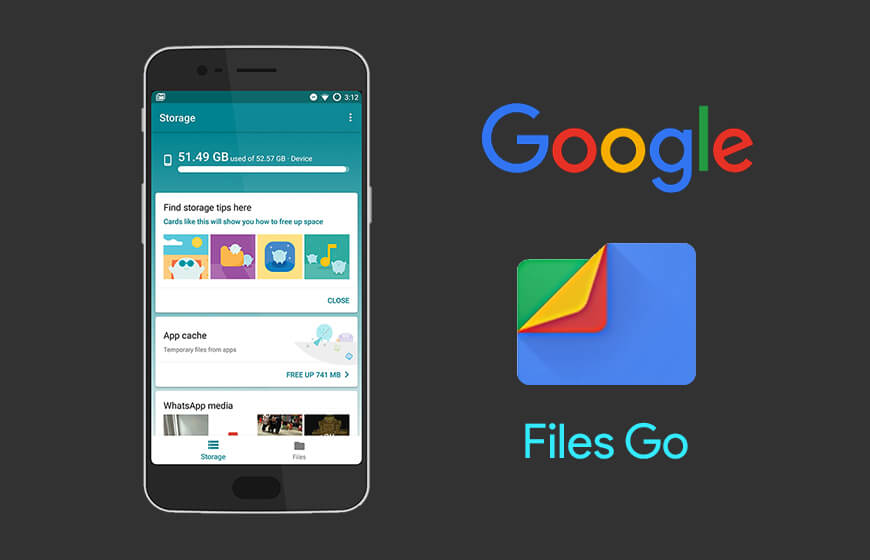 Google launched the app for the Go edition smartphones to add another speeding app that can perform well with low RAM and storage support. However, the app is available for all the Android devices running on Android Lollipop (5.0) or higher. With the launch of the app, the company is targeting the market with more low-end smartphones such as India to make available all the latest features in these devices too. India contributes more than 400 million users to the worldwide ecosystem of the Internet. Google also claimed that the File’s Go helped these device owners to save around 1GB of space in the phone taken by unnecessary files.

In addition to the Files Go, Google also launched Google Go, the lightweight version of its main search app. The app eases down the work of Search Lite app, the Google Go is available in less than 5 MB  and designed too quickly load the results. The search results of the app also have been optimized to save data usage. The list doesn't end here in order to leverage the Indian market the company also launched Google Assistant Go for Jiophone and a new 'two-wheeler' mode in Google Maps to guide the user through the shortcuts accessible only to the two-wheeled riders. Google also adds some customized ways to make payments for the bills in its recently launched Tezz app in India.

PREVIOUS 21 Exciting Facts About Mobile Apps You Must Know

NEXT Top Mobile App Testing Tools For App Developers In 2020

WhatsApp, the messaging app owned by Facebook since 2014 is adding one more feature to the app. The company announces to integrate the real-time location sharing option to its messaging app. Soon, the users will be able to share their location using the WhatsApp with their contacts.{IRP}The

Google App May Soon Have Custom Routine In Beta

Routines in Google assistance are there for the users but only with ready-made tweaks. It, of course, affects the user experience to a great extent as the users need to search from the available commands only to let their wishes fit in the prescribed list of options available. However, the latest co