Ola in Rival With Uber With Bicycle-Sharing Service 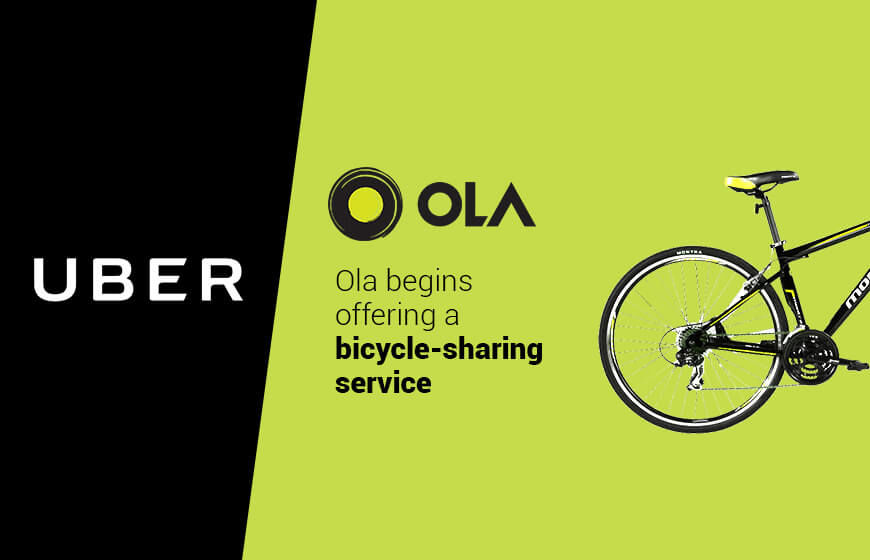 Ola has recently turned to the pedal-power for its initiative to offer bike-riding services to the users in its attempt to compete with the ride-sharing giant Uber. Before Ola, China’s Didi Chuxing and Grab in Southeast Asia have initially invested in bike-sharing companies.

The initiative was introduced to offer dock-less bikes available at every major city point. Users can pick up and leave them anywhere they want to. Ola has started a similar service to jump directly into the race.

The service has been initiated as “Ola Pedal,” which is limited to just a few university campuses in India, one of which is IIT Kanpur. Taking the inspiration from ride-sharing giant Uber, Ola is planning to expand its services to more destination in the weeks to come. The idea behind the initiative is to offer trips for rides that are too short for taxi and too long to walk.

In order to avail the services, users just need to input bike’s code (it is a unique code for every bike located on the frame) that opens the lock code of bike. As soon as users reach their destination, they can easily lock and leave the bike.

Talking more about the initiative Ola in conversation with a news portal said,

“Bicycles are a sustainable and efficient alternative for covering the first and last mile mobility needs in our cities. “With superior technology and available to book on the same Ola app, used by millions of Indians on a daily basis, Ola Pedal will go a long way in solving larger issues like pollution and congestion in our cities, especially for short distance trips.”

It was China’s Ofo and Mobike services that started the initiative in the parts of Asia for the very first time and expanded to the United States and some parts of Europe. Both of the above-mentioned companies are expanding with a million dollar worth that is growing every single year.

Ola’s initiative to start the bicycle-ride services from student campus is similar to the plan China’s Ofo and Mobike services took for its expansion. The initiative from Ola looks promising and have all the potential to be a big name among the ride-sharing giants.

PREVIOUS No More Ads On Lockscreen: Read On Google

Telegram, the non-profit instant messaging app has just shared another success news with the users. The company announced that in last 30 days Telegram app was used by 200 million users.Pavel Durov, the Telegram founder, came out with a blog to share company's success with the users. In the

iOS 11 is one of the most celebrated operating systems for Apple owing to the amazing features the giant has embedded in this OS. Among a series of features, Apple is introducing a new feature in the form of an animated version of some of the most popular emojis introduced earlier in iPhones. The ne

Facebook Comes Up With Keyword Snooze Feature To Avoid Spoilers

Facebook has rolled a new feature that will help you to stay away from triggers that you don’t like. You can snooze a keyword from your News Feed that you are not interested in. For instance, you can temporarily hide post with keyword terrorism, and any feed related to that keyword won’t

Five Industries AI Will Change in 2020