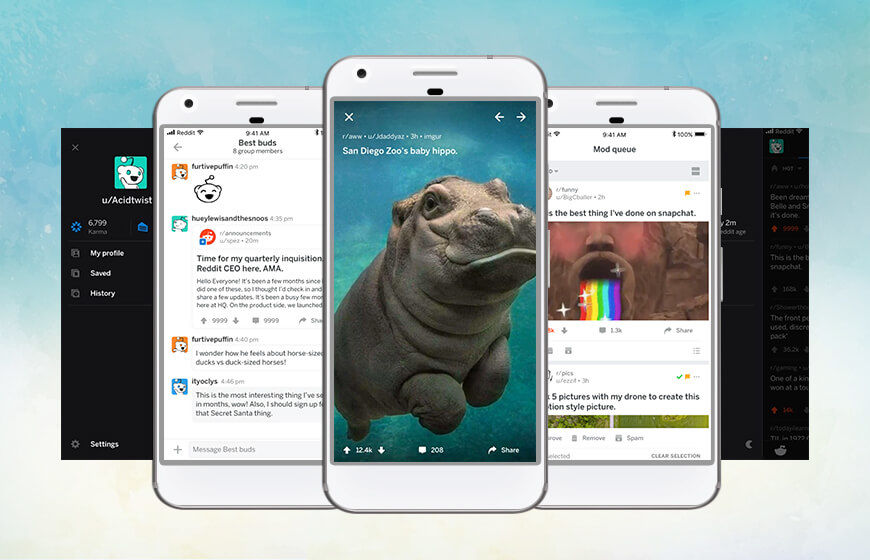 Reddit brings refreshing changes to its mobile app that was first launched on Android and iOS earlier this year. The updates include features such as support for real-time comments, chat, mod tools and more, making the official Reddit experience on mobile, more interactive and social. After testing the feature for months, Reddit’s biggest update brings a new user-to-user chat function. The feature will also be a part of Reddit’s mobile products in a public beta program.

Another following feature by Reddit enables iOS users to view images, gifs, and videos in theater mode. This will allow them to view media in full-screen mode and swipe back and forth to see older or newer media posts. The success of this feature was first claimed by the new third-party Reddit app, Apollo that however, doesn’t let you scroll to the next image. The same app also inspired Reddit’s new update for Safari View Controller which lets users open links in Safari instead of using Reddit’s native in-app browser.

Much similar to Twitter, Reddit now offers real-time experience to its users as its iOS app will now support live comments. Community moderators have also caught Reddit’s attention as the iOS app now offers a mobile version of Reddit’s desktop mod management tool that will help moderators update their list of moderators, approve and disapprove content and spam in bulk.

Reddit in the technology news has long been brandished with neglect for mobile but things are starting to change. In this digital age where mobile is gaining popularity over a desktop, Reddit has very less choice but to adapt to these changes. Considering its user base of 330 million monthly active users, who post more than 9 million times per month, and ~370,000 times per day, the changes were much needed.

Google Is Blocking The Logging Attempts From Uncertified Android Devices

Google has finally started clamp down hard on unauthorized use of Google Android apps. The search giant is blocking the illicit devices from logging in to the Android apps, spotted by XDA developers. Google has been testing the action for quite some time, but now expanding it to a wider scale. The u

Deliveroo, a food delivery app is reportedly in talks to raise more funds that are expected to help the company to be valued at $4 billion. The hundreds of millions of pounds funding are anticipated to come in from the existing and new investors.According to speculation by the Sky News, by addin