Everything there’s to know about Android, its name, origin, secrets and stories that will leave you shocked. 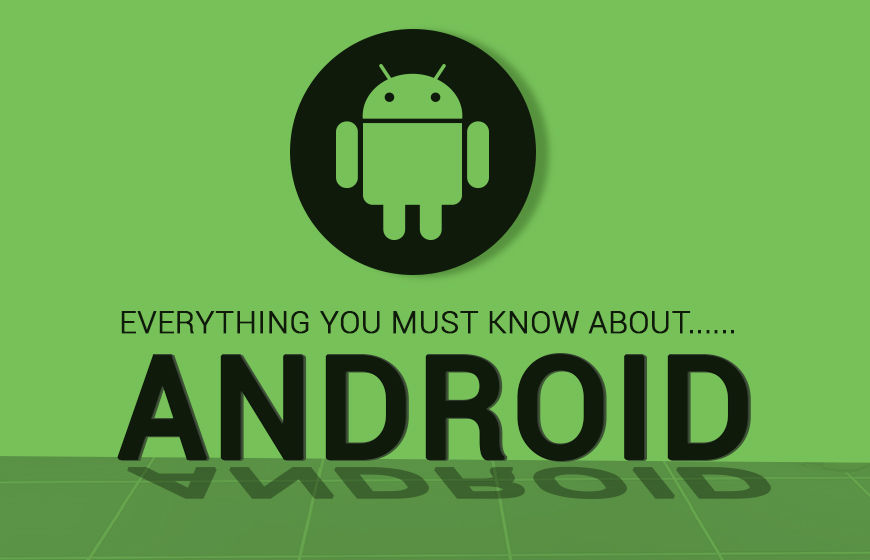 It all started with a phone call in 2004 when a young genius named Andy Rubin called out to his dear friend Steve Perlman asking for financial assistance. While all other investors turned their back, it was Perlman who believed in Rubin’s vision and he was right to do so considering that Android today is the leading OS in the world. Today, other than Apple and Microsoft, Rubin has eliminated all other competitors from the market including Symbian, BlackBerry, Palm OS, WebOS, and Windows Phone. Indeed, it wasn’t a lonesome victory as he had help from investors like Perlman and tech giant like Google. In fact, Android got its big break when Google decided to make Android an open source OS which now powers 85% of all smartphones across the world, beating its rival Apple’s iPhone accounting for a mere 11 percent. 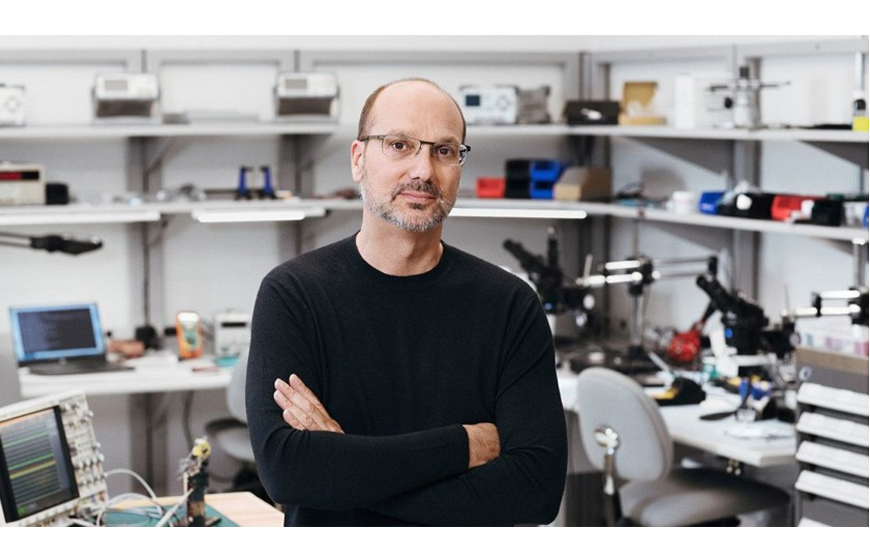 Fun Fact about the man behind Android, Andy Rubin

Rubin worked at Apple as a software engineer between 1989 and 1992 after Caswell offered him a job, but what’s more interesting is how he got the job! During a vacation in the Cayman Islands in 1989 where the two met, Caswell got into a fight with his girlfriend and got kicked out of his beach cottage. Though the lads were barely friends, Rubin offered Caswell a place to stay. The favor was returned with a spot at Apple. Funny how dots get connected, isn’t it?

The next big chapter was added to Android’s history in 2005 when Google was quietly buying up a load of start-up companies. Little did they know they found their gem Android. Its four founders- Rich Miner, Nick Sears, Chris White and Andy Rubin stayed on to continue to develop the OS under their new owners. However, while Linux would be used as the basis for the Android OS, Android itself could be offered to third-party mobile phone manufacturers for free. Both parties believed that the if third-party services including apps used the OS, it would only bring in more for the company.  Rubin did part ways with Android in late 2014, when Rubin launched a startup business incubator, only to reunite again earlier in 2017. Rubin’s return was officially announced at the launch of Android-based Essential Phone, much speculated as anti-iPhone.

Let’s time travel ten years in the past to November 5th, 2007. While the press is speculating the release of a Google Phone, the company shocks the world with a bigger news- the launch of a public Android beta version 1.0 for developers. I say shocking, for it was the same day the company also announced the biggest ever collaboration of 34 technology manufacturers- the Open Handset Alliance. This involved wireless telecommunications providers (T-Mobil), LG, Samsung, mobile handset makers (Motorola, HTC) and chipset makers (Texas Instruments, Qualcomm) amongst several other tech companies that would work together to create open mobile device standards.

Who designed the Android logo? 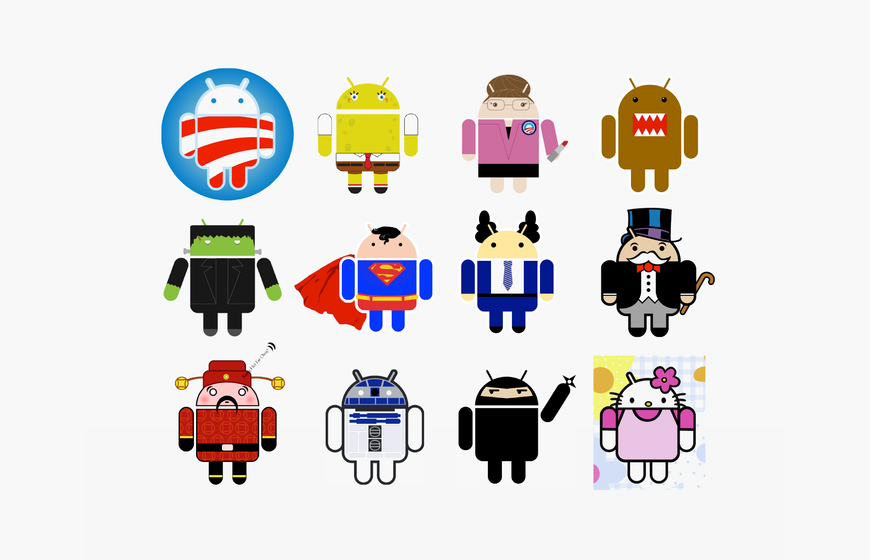 Google employee, Irina Blok with just one directive from the company- to make the logo like a robot came up with the now familiar logo for Android OS- the green robo bug. According to the designer, now creative director at Edmodo, a social network for students and teachers, the logo is inspired in part by the much familiar restroom logos representing “Men” and “Women”. Contrary to the usual norm where one would expect a big logo to be patented, Google kept the logo much like it OS an open source and allows others to modify and use the logo under the Creative Commons 3.0 Attribution License.

Why tasty treats to the Android OS updates 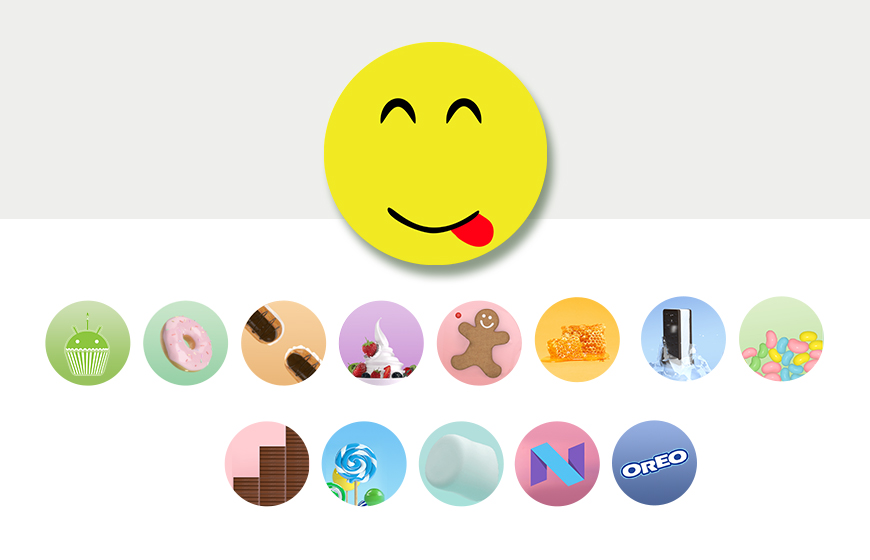 It is no surprise that Android has been one of the fastest-developed operating systems ever. But what is surprising is the word choice for most Android releases that often have candy or dessert-style code names. While the first OS Android 1.1, released in February 2009, didn’t     have a public code name, every other OS updates have a “sweet tooth” to them. Launched in April 2009 - Android 1.5, just a few months later in April 2009, got its first public code name, Cupcake. Though the credit for these sweet treats have often been credited to Google’s project manager, Ryan Gibson, the secret behind them wasn’t revealed until the release of Android 4.4 KitKat. Google offered an”official” statement saying, “Since these devices make our lives so sweet, each Android version is named after a dessert.”

Fun Fact: Every year, post the launch of a new OS, Android places a new statue with its code name on the lawn in front of the company’s Visitor Center building in Mountain View, California. 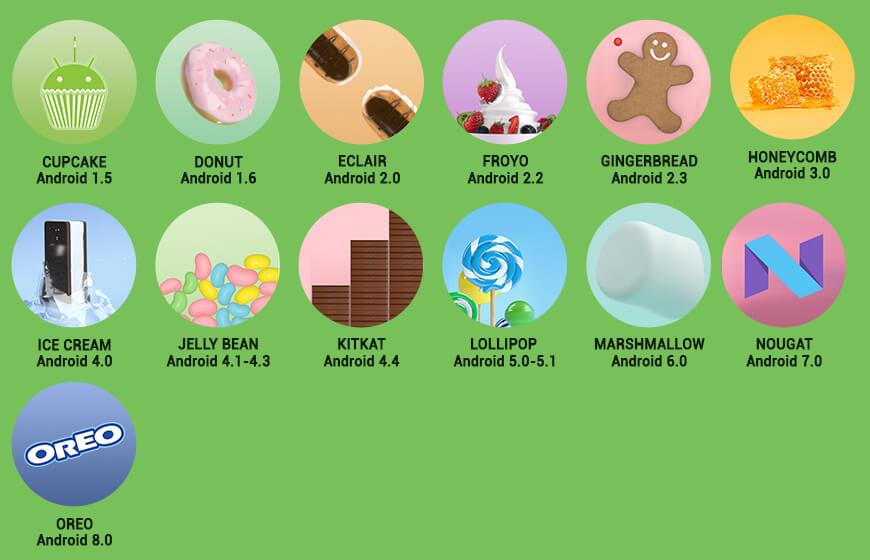 Fun fact: Google used the code name “Macadamia Nut Cookie” internally as it developed Android 6.0 before settling on the candy treat Marshmallow as the official public name of the OS. A much-followed pattern from the launch of Android 5.0 which was first codenamed “Lemon Meringue Pie” before releasing it as Lollipop on the official launch.

Considering the fun tricks one can play with Oreo 8.0, Google’s got everyone excited about the release of Android 8.1 Oreo in December, while there may be certain setbacks at the moment, the upcoming Android Oreo upgrade is speculated to bring a bluetooth bar in quick settings and vibration and other prompts by pressing a notification for long.

While Apple is a fan of privacy and exclusivity regarding its iOS, Android has won the globe with its open source OS which entertains third-party apps. Being an open source platform, the green robo-bug is constantly under the threat of malware which the software has impressively defended. But who doesn’t have their dark days? Android had theirs when amongst several other malware named Trojan, Ghost ctrl., have attacked several apps on Google Play Store. All hell broke loose when a specific bug named “Judy” hit over 36.5 million Android-based phones, questioning the credibility of the open-source software. While the company employed the expert vigilance of security experts as Check Point, Google doled out as much as $100,000 for a single vulnerability report ensuring its dear user that no compromises will be made to their privacy and cybersecurity. While hackers leading bug bounty programs as HackerOne earned $80,000 in 8 months.

AI is taking over the digital world and everyone wants an in on this trending technology. It but obvious that the tech giants in Silicon Valley- Apple and Google are on their feet to acquire and integrate the latest AI startups and solutions. According to a report from Gartner, “by 2020, AI technologies will be virtually pervasive in almost every new software product and service.” It further claims that in the same year, “AI will be a top five investment priority for more than 30 percent of CIOs.” But who's ahead in this race to AI- Apple or Android?

While Apple might be the pioneer of redefining human interaction with computers, Google is leading the race to AI in the form of Google Assistant, placed at the heart of its new Pixel smartphones and Google Home smart speaker. In order to improve its efforts in this direction, Google is acquiring leading AI startups from all across the globe. The company has bagged 12 AI startups including British company DeepMind Technologies for some $600M - Yes! The same company whose AI program recently beat a human world champion in the board game “Go”, while the most recent acquisition being India-based Halli Labs. Apple ranked second with a total of 8 acquisitions, followed by Intel, Microsoft, and Facebook tied for third place.

Fun Fact: One of the richest men in the world and Microsoft founder Bill Gates is an Android user. 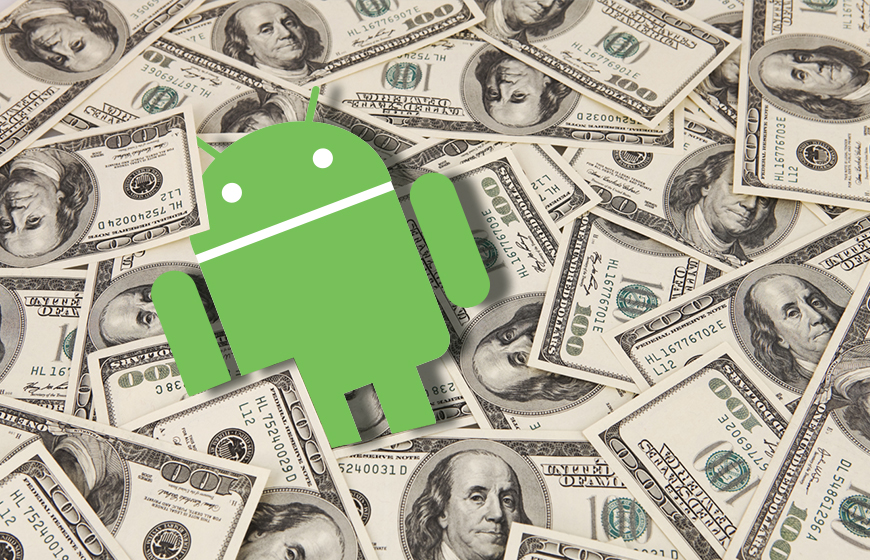 Specifications are not the only field where Android seems to be beating Apple, the open source OS is winning even in terms of Revenue. According to app analytics firm App Annie, while iOS App Store will generate over $60 billion in 2021, Google Play will generate $42 billion, and third-party stores, $36 billion. How Android wins is that those lucrative third-party app stores also include the Android app marketplaces offers by Tencent, Baidu, Xiaomi, Huawei, and others which accounted for $10 billion in revenue last year and will grow to $20 billion in 2017.

Android Vs Apple I Which one’s better?

Android and Apple have become no less than a religion with strong devotees of each platform. Every Time one release a device or a small update, the web is flooded with a series of comparatives between the two leading tech giants. The leaders of the same have often taken subtle digs at one another regarding the same. Whether is the realm of AR+VR or AI, Google and Apple are doing everything in their power to stay at the top. Though their approaches are certainly different, the two leading pioneers of innovations are continuously striving to create a monopoly. So which one is your religion?

PREVIOUS Google is Again The Default Browser in Firefox

How Does Malware Impact Your Computer's Performance?

A few years ago, the Internet was considered a haven where one would browse without the fear of any inconvenience or attack. However, things have since changed, and now, being online is no longer safe, all because of the introduction of malware.This malicious software keeps on reinventing itself

There are over 62,000 education-related apps available in the various app stores, which are revolutionizing education. But how? Today’s students benefit from the powerful new ways of mobile technology and mobile apps take away a major chunk of it. Mobile apps are taking education out

Google Drive Will Die in March, Backup and Sync And Drive File Stream Will Replace It

Everyone including myself rely on google drive to sync and save my data almost sub-consciously and the latest update on the subject is surely going to shuffle things a bit.Yesterday, Google announced that the company will pull off the support for the Drive app from December 11th, 2017 and will s