Node.js vs Python for Backend Technology in 2022

Node.js vs Python have a close competition as a preferred backend technology against each other in terms of scalability, performance, and more. But which one is the actual winner? 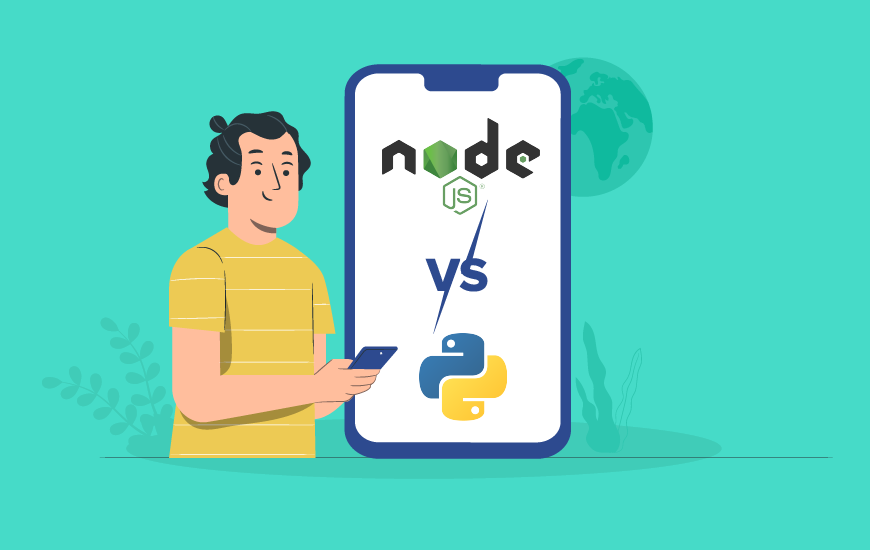 Among many popular backend technologies, Node.js and Python stand at crucial positions as favorites of developers globally. Now, there is a major difference between Python and Node.js for backends that you should understand before we proceed further in this blog. Node.js framework, a JavaScript-based development environment, is considered as one of the top backend technologies that use JavaScript as the programming language to help in creating robust backends. However, Python is a programming language that has been existing in the market since 1991 and developers find it perfect for their usages. Now, if you are confused and have questions such as Node.js vs Python- which is better for your projects, read this blog until the end to find your answers.

Node.js vs Python for backend

Before proceeding further, let’s understand what both terms mean.

Built on the JavaScript Engine, Node.js uses an event-driven model. One of the top backend frameworks 2022, Node.js helps developers in processing multiple requests without having to disturb I/O activities. Developers use Node.js to create real-time applications with JavaScript to run them on multiple OSs like Microsoft Windows, OS X, and more.

The major Python vs JS difference is that Python is a dynamic programming language that helps in scripting by being object-oriented and multipurpose. The programming language has been existing for 30 years now and has been upgraded occasionally to have many APIs and libraries. Currently, to build robust business applications, Python is a perfect pick between developers.

For Node.js, scalability is the main feature that it offers. With Node.js frameworks, you are supposed to create microservices and modules, which will, later on, run their own processes when the application is scaled. Thus, adding nodes will also help you in expanding them while you add more resources.

For Python, it has limitations as it can run on several threads due to the Global Interpreter Lock. To run another process, you need to ensure that the first process is over. In short, from the perspective of Node.js vs Python performance benchmark, Node.js leads the race in scalability.

Compared to compiled languages such as Java, Python is slower. The speed of processing requests with Python is much slower. But Node.js has the freedom of processing several requests simultaneously due to its event-driven non-blocking architecture. For Python vs Node.js speed, Node.js easily takes the cup of the best backend technology in 2022 in this case against Python.

Node.js, one of the best cross-platform frameworks, gives you the freedom to build a single app that will run across multiple platforms such as Windows, Mac, and Android among others. You can use Node.js for backend development and front-end development as well. The framework lets you develop web applications, hybrid apps, IoT solutions, and cloud-based products.

On the other hand, Python is majorly used by full-stack developers for web and desktop applications. Smartphone applications are not usually built on the Python language due to the fact that mobile computing is its weaker side. However, Python is seeing a rise in the market for IoT and AI solutions. In terms of Node.js vs Python for machine learning, Python is an ideal choice for developers.

Existing since 1991, Python has a huge global community available to help you out all the time. There are a huge number of contributors having experience of different levels. If you are a developer or own a business, you can find community support for Python easily.

After going through these facts that we mentioned above, Node.js vs Python does not have much of the difference. In fact, their usability is entirely dependent upon the type of project that you are going to work on. For instance, if you are an app developer for smartphones, Python might not be an ideal choice for you. But for web and desktop applications, Python is great. In the same way, Node.js is amazing if you want to build frontend applications, backend, and more.

In this blog, as we are talking about top backend technologies, then surely we have to go with Node.js due to its amazing usability. It helps in creating robust solutions and it gives an advantage to developers of building these solutions faster compared to other technologies. Well, hopefully, you found this blog on the best backend technology in 2022 among Node.js vs Python useful. You can explore MobileAppDaily for more informative blogs and the latest app news for developers and tech enthusiasts published regularly.

Until next time, Happy Coding!

PREVIOUS FlexClip Review- The Best Video Editor for Everyone

NEXT IoT in the Healthcare Industry: Use Cases and Analysis

Online advertising through mobile apps has become increasingly popular among businesses. As per Statista reports, the revenue generated by mobile apps will reach $189 billion by 2020. Most of this revenue will be generated through in-app advertising as well as app sales on app stores like Apple'

A Beginners Guide to Android App Development in 2021

So you have been following the blogs on Android development for some time now, and the topic seems an interesting one to you. There are possibilities that you have gone through a technical blog on Android app development and finding it hard to cope with the information that is shared there.In ca

From magnetic cards to the cloud, it has been a long and speedy journey of the IT revolution. Software development went through the different phases, where it’s directed towards making things easier and affirmative for the prospective steps.The Android platform came as the top gear for the

Role of Story Points in Agile Estimation in 2021