Netflix vs Hulu vs Amazon Prime: War of the Streaming Apps

Confused between Netflix vs Hulu vs Amazon Prime? This comparison review will answer your question. 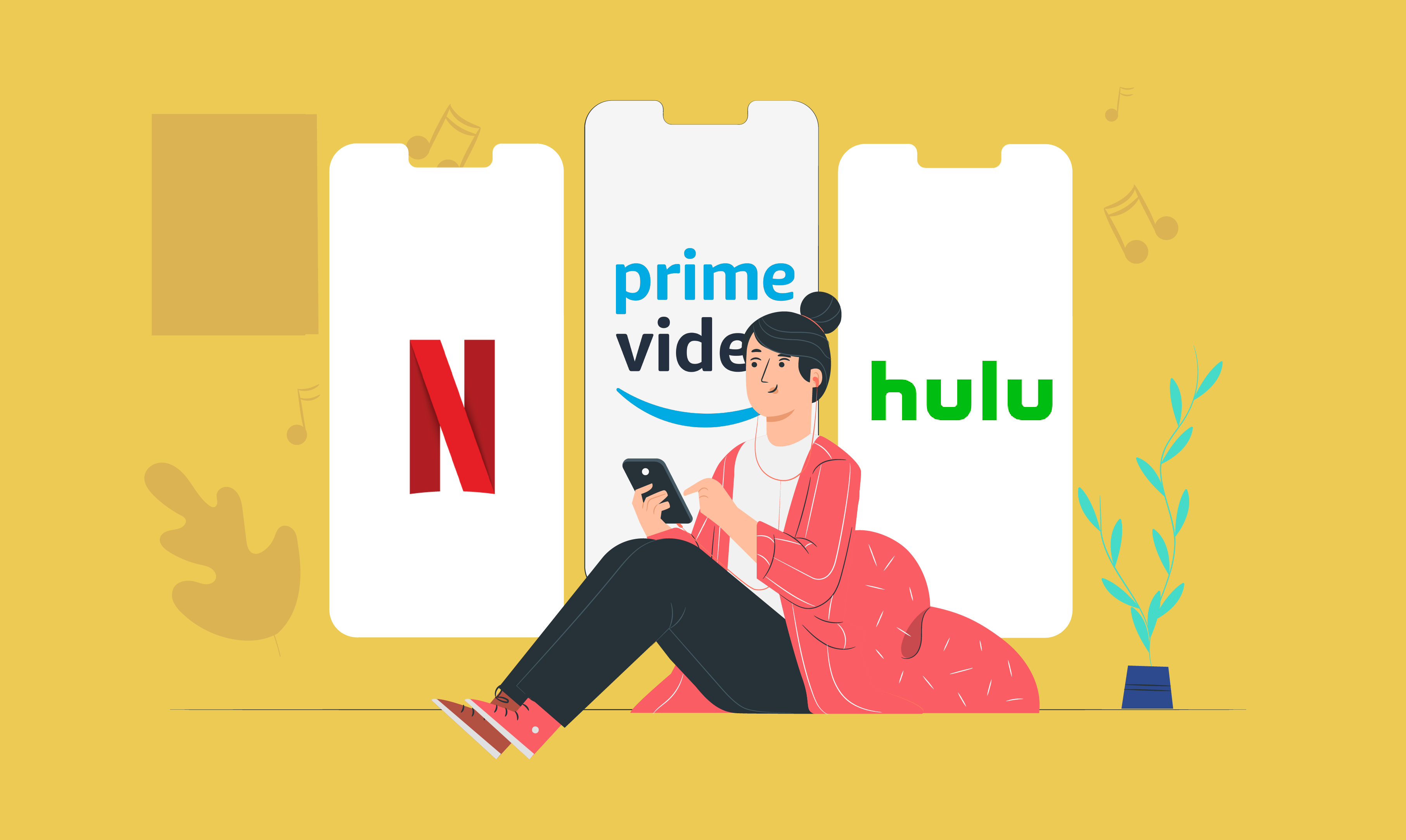 We are lucky to live in an era where the entertainment industry is at its peak. With so many streaming platforms existing in the market, not only quality standards but prices are also competitive. Ultimately, the audience is enjoying the benefits of the competition between streaming apps in terms of finances and quality content.

Now, whenever streaming services are the topic, Netflix, Hulu, and Amazon Prime are the names that come to mind first. Why? Because they are leading the streaming industry with a huge margin compared to other apps. Not only that, these streaming platforms have expanded their coverage in many countries.

In this blog, we are going to compare these three companies. We are going to discuss the features of Amazon vs Netflix vs Hulu. In the end, we will conclude this blog by answering the question Netflix vs. Hulu vs. Amazon Prime: Which Should You Choose? 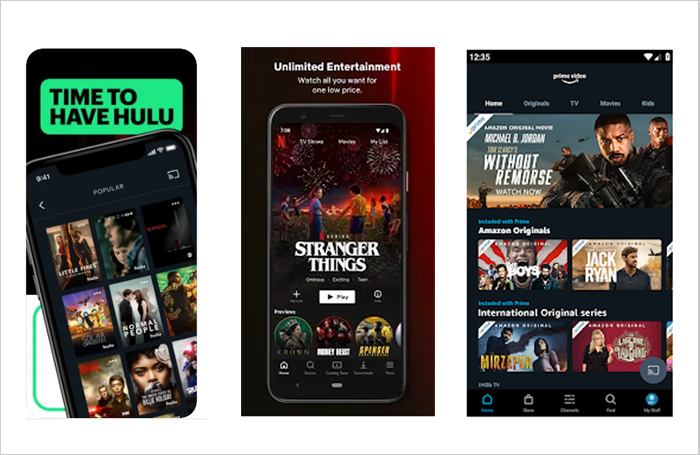 Well, it might be a little difficult to answer this question as all three streaming apps are unique in their ways. For instance, Netflix does not offer ads but Amazon Prime is cheaper. So, we are going to discuss a few elements such as these to figure out the top among Netflix vs Amazon Prime vs Hulu. Now without wasting more time, let’s dive right into details.

Pricing: Prime vs Netflix vs Hulu

The very first comparison element will be Pricing. Pricing affects a huge chunk of people and their decision of picking the preferred streaming service. However, pricing varies from one country to another. Thus, we are discussing this element by taking the US market as the target location.

Amazon Prime Packages- In the US market, users can either sign up for the Annual Prime Package or a monthly subscription. Now, apart from the regular package, Amazon also offers a special discounted package just for students. Let’s have a look at the prices of these packages.

Netflix Packages- Netflix has packages divided into three segments in the US market. These packages vary according to their prices and offer features accordingly. The cheapest package begins with an $8.99 per month subscription fee and is called Basic.

Hulu Packages- Hulu has gained quite good popularity in the US market. Moreover, its packages are competitive as compared to other streaming services. Hulu also offers annual packages, unlike Netflix. Which gives it an advantage.

Is Hulu better than Amazon Prime or Netflix in terms of pricing?

Comparing all three streaming services, Hulu is the cheapest Amazon Prime and Netflix alternative for users. As mentioned above, the basic Hulu plan comes at a $5.99 per month fee. However, other services cost more. Thus, if the price is the choosing factor to pick a streaming service between Prime vs Netflix vs Hulu- Hulu is the winner. 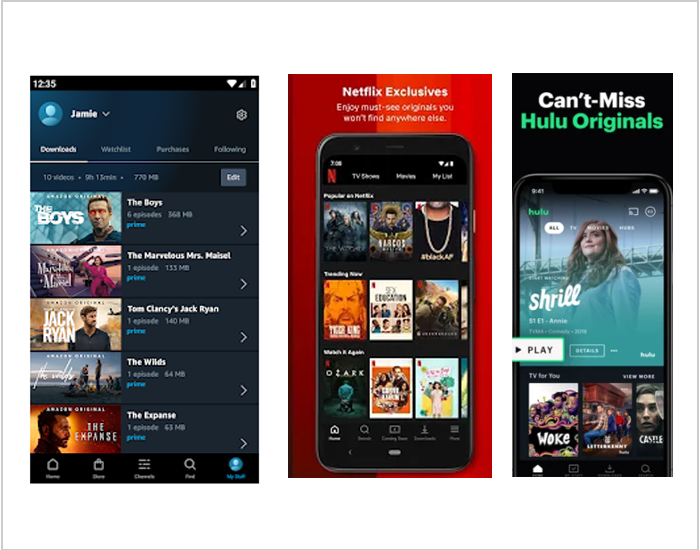 All three streaming platforms offer content that users love. Thus, it is hard to say which platform has the better quality of content. As per a report by Business Insider, Netflix has over 1569 TV shows, including Netflix Originals along with 4,000 plus movies. Internationally, Netflix might have more than 15,000 titles. This data is mentioned in a report by uNoGS. Netflix’s show count is dipping for a couple of years as it is focusing more on producing original shows.

On the other hand, Amazon Prime has around 2,100 shows and 24,000 movies internationally. These numbers also include Amazon Originals. Moreover, Hulu is known to have around 1,650 TV shows, 2,500 Movies, and over 43,000 TV episodes. These numbers include shows and movies in languages other than English as well.

Availability: Prime vs Netflix vs Hulu

While Netflix and Amazon Prime have the largest streaming market, Hulu lacks the expansion to many countries such as India. Hulu is currently offering its services only in the US territories. However, Netflix has covered over 190 countries, including the US, India, Canada, Australia, The UK, South Korea, Japan, and more. Amazon Prime does not have a market as big as Netflix. It has covered the US, the UK, Austria, France, Germany, India, Japan, and Spain.

In the case of Amazon Prime, the UI is amazing but not as good as Netflix. It does not play trailers automatically as well. To see a glimpse of the title, you need to first click on it and explore options further.

While Hulu is working continuously on improving its UI. You can choose your preferred Hulu channels to find them from the Homescreen itself. Moreover, the interface also just like its alternatives categories- Watching, TV Shows, and Movies, among others are available as well.

However, Netflix stands out to be a clear winner due to its UI that knows exactly what you want to watch. Moreover, you also get content that is mixed up with various moods.

Netflix vs. Hulu Plus vs. Amazon Prime Comparison: Download Links

Before we conclude this blog, here are the links from where you can download your preferred best streaming service.

Well, after going through all the points that we discussed, it is clear that defeating Netflix is still hard. Thus, Netflix is a clear winner in our opinion. Not only in terms of features and the UI, but Netflix’s availability in 190 countries makes it the better choice. Especially if you are continuously traveling, or love international content- Netflix takes the cup.

Now, this comparison that we did, you can also submit your app to get a blog written for your app like this. You can get your app reviewed by contacting us and get a marketing opportunity for your mobile app. It will give you an advantage and increase your download count.

NEXT Udemy vs Coursera - Which Learning App is Better?

Latest App Monetization Report By Soomla: All About eCPM And AdNetwork

Soomla offers you the opportunity to have a detailed insight into the Monetization Benchmarks Report for Q1 2019. The report is the contined edition of their previously published report. Here, the stats will be shown on the basis of YOY figures i.e., Q1 2019 Vs. Q1 2018. The published repo

Now more so than ever, people are heavily dependent on mobile devices. This makes mobile apps incredibly valuable for engaging audiences. Rather than being used as a single touchpoint for customers, brands are beginning to see that mobile apps are best used in an omnichannel marketing approach.O

Big brands spend multi-million-dollar budgets on their marketing campaigns. They invest solidly in activities that can help convince people to use their services: partnerships with the top influencers, social media advertising, and even street billboards.When it comes to app stores, many big bra

Since the last decade, the app market has expanded exponentially. Every day, almost 6000 apps are added to the app stores. This makes the life of a new app a little tough to sustain the cut-throat competition.Once an app is rolled out in the market, it’s core purpose is to acquire as many

Mobile And In-App Advertising Trends: Here Is what's Changing in 2021

Mobile is influential, and so are the trends that are seeding up these days. And why we are saying that is because we are flattered by the magic mobile and the recurring trends can create on the business. The thought popped up right in the middle of a conference I was watching online.There were