How to Improve App Design with Microinteractions in 2021?

A detailed breakdown of microinteractions, why they matter and how to utilize them to maximize user engagement.

Take this example of microinteraction from Facebook, mentioned below. It not only relays feedback and gives the user the sense of being in control but also makes the app interface design, fun and engaging.

There are many popular ways to ace app design but no UX design can sustain without clever microinteractions. These subtle design details aren’t just limited to encouraging user participation or guiding them to a particular action, but are also needed for navigating the user through product and make them feel rewarded for doing so.

Every microinteraction can be split into three parts- action, reaction, and feedback. Based on how well this process engages the app users, one can determine how optimised is your app design?

So, before you integrate a dedicated microinteraction in either mobile app or web design, make sure it’s aligned to your target audience and the theme of the product/app. Keep the search microinteractions simple and intuitive and use subtle animations wherever it substitutes the content.

It’s a given rule that to design an engaging app, it’s crucial to integrate the latest design trends popular with the users. But to design microinteractions, app designers must be well versed with the anatomy of the former.

Every microinteraction in mobile UI design has four parts.

1. Triggers that encourage users to scroll from one screen to another, pull to refresh, tap, click or perform other GUI commands. Triggers can be user-initiated or system initiated.

2. Rules that determine what happens with a trigger.

3. Feedback that keep users abreast of the on-going activity in the app. This could be in the form of loading animations, notification pop-up, color change, among other microinteractions.

4. Loops and Modes that determine the meta-rules, the time-frame of how long an in-app action will last and informs users when they need to switch. 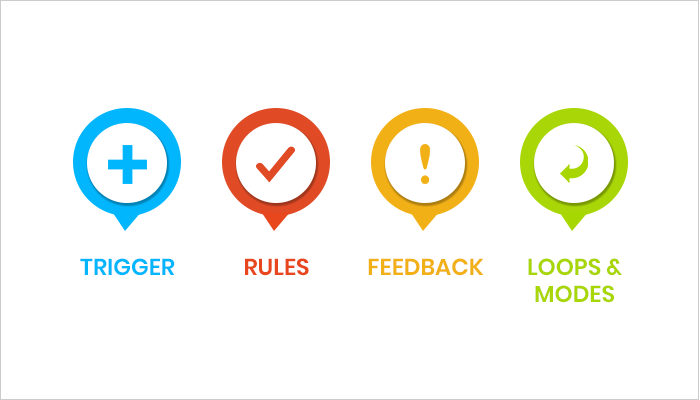 How Microinteractions Work in App Design ?

Every microinteraction must strive to create a habit loop- a cue/trigger that initiates an action, a routinely response to the cue and finally a reward/benefit user gets from performing that action.  The microinteractions must be predictable so the user can perform the same action intuitively.

Here are a few examples of how you can use microinteractions in app design to maximize user experience.

Offers a smoother design alternative to tap, helps user switch between tabs and guides users navigate through the information about the product. Since it’s a common gesture by now, swipe is one of the most fun and addictive microinteraction.

Setting up a password or creating an account is always a haggering chore for users and often leads to cart abandonment or ditching the app. That’s why having interactive microinteractions at the time of data input is a sure way to retain user engagement.

To make an app human-centered and addictive, app designers cannot at all costs, ignore animations. Take this animated button in the example. It not only engages user interest but also relays the time it’ll take for the task to finish. Animations in microinteraction are what makes the app functional and fun.

Users will abandon your app the second they don’t know what’s going on with an in-app activity they’ve participated in. That’s why it’s crucial to integrate microinteractions in system status architecture to keep users engaged with a certain in-app action.

Microinteractions can make or break an in-app tutorial because if the users don't fully understand your app or a certain in-app action, they will not stick around to figure it out on their own. So while you’re busy employing data science to ramp up your app’s UX design, make sure your app tutorials integrate just as effective microinteractions.

There are certain prototyping tools that specifically cater to micro-interaction tasks. For designers familiar with coding:

For designers looking to create a microinteraction between a screen-like push and a module:

And, to create detailed interactions along with animation:

Adding some drama to the process of uploading;

Or, a fun toggle to introduce screen transitions.

1. Microinteractions are subtle action-taking stimulus that direct users to take a particular action, and continue using the app.
2. Every microinteraction in mobile UI design has four parts: Triggers, Rules, Feedback, and Loops & Modes.
3. Designers must strive to create a habit loop in the microinteraction- a cue/trigger that initiates an action, followed by a routine response to the cue and finally offering a reward/benefit to the user for performing that action.
4. The most popular types of microinteractions include: Swipe, Data Input, Call To Action. Animations, Current System Status and App Tutorials.
5. Popular tools to design microinteractions include: Xcode, Android Studio for Mobile, CSS Animation for Web. Similarly, Invision, Marvel, Principle, Adobe CC, Origami Studio and Protopie. And, for animations in microinteractions, After Effects suit the best.

What are the Best Practices for Dashboard Designing in 2021?

Mobiles have significantly changed the way we live. Whether we are reading the news, paying utility bills, or purchasing goods, most of us are doing it all on mobile devices.According to a report by Mobile World Live, by next year (2020), on average, people will use 4.3 internet-connected device

While designing an app, there are a few things that bother mobile developers the most. For example; laggy UI, app development cost, and app crashes among others. Now, to solve that problem, a proper plan considering mobile app design guidelines is important. User Interface is the first impression mo

A few years back, developers initially used to build a desktop website and later transformed that into a platform-oriented design as per client requirements. But now, the scenario has completely changed where business entrepreneurs raised their focus on having a mobile-oriented design for their bran

Dos and Don'ts of Design App Notifications in 2021